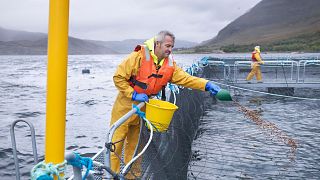 A project in Yorkshire which turns captured carbon dioxide into animal feed has just received major funding from the UK government.

The ‘carbon recycling’ scheme will provide sustainable food for fish and poultry farms which has an up to 75 per cent smaller carbon footprint than other food sources.

While we are becoming increasingly aware that a meat-based diet has a greater environmental impact than a plant-based one, few know that the biggest environmental impact comes from the food the animals eat. Just last week an article published in the Journal Science claimed that a fifth of soy and beef imported into the EU from Brazil came from illegally deforested land.

In 2017, the WWF found that 75 per cent of global soy and maize production was being grown to feed animals, mostly pigs and poultry. With diets around the world tending towards higher consumption of meat, the production of animal feed poses a growing threat to biodiversity as land is cleared to grow more crops.

Animal feed is usually made from soy, fishmeal or grains - which can lead to these devastating environmental impacts. This new process, created by Deep Branch Biotechnology, takes CO2 from industrial emissions and uses it as an energy source for microbes which generate a single-cell protein specially designed for animal feed.

They have been awarded £3 million (€ 3.3 million) in funding by the government to test whether the process will work on a larger scale and what the overall carbon emissions would be.

CEO of the company, Peter Rowe, explained that the technology could help reduce the UK’s reliance on carbon-intensive international supply chains. Its potential use in food for fish and poultry “represents a new way of generating more sustainable animal feeds.”

To provide a source of industrial CO2 for the process, Deep Branch has partnered with a power station in the north of England which was recently converted to burn renewable biomass instead of coal.

Drax Power Station in Selby is the UK’s largest power station and supplies 5 per cent of the country’s electricity needs. Drax has ambitions to become carbon negative by 2030 and capturing the CO2 it emits for projects like this one is part of this plan. Already the plant has been experimenting with using its captured CO2 to create new plastic products.

This is partnership represents part of a wider consortium of 10 industry and academic groups called REACT-FIRST which received the £3 million funding. The consortium is “committed to tackling the global climate crisis and the goal of achieving neutral/negative carbon emissions”.

“Currently, most animal feed protein sources are imported from overseas, making the UK dependent on complicated and fragile supply chains,” said Rowe. “REACT-FIRST has been created to focus solely on addressing this problem.”

The Yorkshire project is one of nine which received part of a £24 million funding package aimed at making the food production system in the UK more efficient. Others included a vertical fruit grower in London, AI technology being used to improve the efficiency of farms and a project testing whether robots can be used to carry out energy-intensive jobs like picking fruit.

“From robotics assisting our farmers in fruit picking, to technology that converts CO2 to clean animal feed, the incredible projects we are backing today represent the future of farming,” said UK Science Minister, Amanda Solloway.

She added that using the “best of British science” the projects chosen by the government would “help accelerate our transition to net-zero food production”.