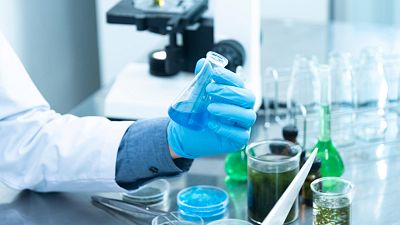 A French startup is creating plant-based protein from blue algae, which it claims could help solve world hunger.

Kyanos, based in Toulouse, has developed a technology that allows the team to create protein from algae on a large scale. They hope it will help to avoid the harmful environmental consequences that come from other protein sources like animal agriculture.

Founder Vinh Ly explains that the idea came to him while working for Airbus where he was looking into ways to use algae for biofuel. “As I studied the idea, I found that the use of microalgae could also go beyond that and be used as healthy food – with multiple health benefits.”

Ly claims the algae-based food source has “no need for synthetic fertilisers, no agricultural soil depletion, no greenhouse gases, no contamination and an unlimited supply potential to meet the food industry requirements.”

With funding from the EU’s Horizon 2020 research programme, the company has opened a factory and is already selling the product to customers. It claims that, due to the high levels of Vitamin B12 in the food, this is a good supplement for a vegan diet.

The single-celled organism is already widely consumed in Japan for its supposed health benefits and Ly says so far customers are loving it. The next goal is to step up production to make plant-based algae protein the food of the future.

UK-based restaurant chain Nando’s has also been testing algae as a possible food source for their chickens.

With 930 locations around the world, the company is looking to halve the carbon footprint of its average meal and reduce its carbon emissions to net-zero by 2030. Famous for its spicy chicken meals, UK Chief Executive Colin Hill said the company wanted to be the first to combine sustainability with animal welfare.

Standard poultry feeds such as soy can have a devastating impact on the environment. Soy is the second biggest contributor to deforestation after beef and a fifth of all EU imports were recently found to have been from illegal operations in Brazil.

Nando’s is supporting research to find more sustainable food sources for its animals such as algae and insects. It could soon start serving chicken fed with these alternative options in its restaurants.

The announcement comes not long after fried chicken brand KFC said they would be partnering with a Russian biotechnology firm to produce 3D printed “Meat of the Future”.

The partnership aims to create the world’s first lab-grown chicken nuggets which are made from real animal cells. The lab-grown nuggets could be ready for testing as soon as autumn of this year.