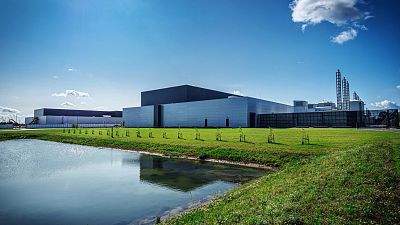 The tech company says that using the 100,000 MWh of excess heat generated by its wind-powered facility in Odense will help the city to cut carbon emissions.

Data centres are home to tens of thousands of computer servers. They are networked together and then linked to the outside world, storing all the information a website needs to operate.

For Facebook that includes likes on cat videos, messages sent by your friends, and the selfies you post. Data is being processed and stored by these servers 24 hours a day, 7 days a week.

While keeping our online activities running smoothly, these warehouses filled with computers generate a considerable amount of excess heat. Cooling data centres has long proved an environmental challenge, with some opting for radical solutions like building them underwater or inside the Arctic Circle.

But there is another option: recycling the heat.

At the facility in Odense, the heat generated is directed over coils of pipes, increasing the temperature of the water inside. This warm water is sent to a heat pump facility close by where the temperature is increased again. It then goes on to homes in the local community.

In a blog post, Facebook energy specialist Lauren Edelman explained that the location for the data centre was chosen because it was somewhere this excess heat could be used effectively.

“The qualities that drew us to Odense include the ability to connect to a highly reliable Nordic electric grid with opportunities to add new sources of renewable energy, good access to fibre, and the talent needed to build and operate the data centre," she said.

"But what really differentiated this site from others was the opportunity for heat recovery."

Facebook says that although none of the technology is new, the combination of heat pumps and recycled data centre energy will help the city with its goal to phase out the use of coal by 2023. It estimates that the data centre will reduce Odense’s demand for coal by up to 25 per cent.

“It’s amazing because every time we post pictures of our pets, family, and whatever on Facebook, it will produce heat that will heat up to almost 7,000 houses,” said Odense Mayor, Peter Rahbæk Juel. He added that this was a “good, green side effect” of building the facility near the city.

”I think that the data centre in Odense will be a model for a lot of data centers around the world.”