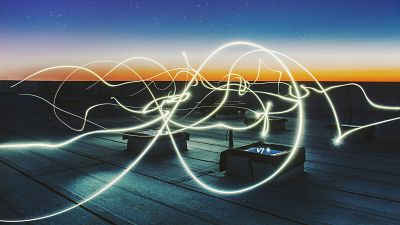 Scientists have worked out a way to generate energy from nothing but the air around us, and not by using wind turbines.

Researchers at the University of Massachusetts Amherst have developed a device that uses a natural protein to create electricity from humidity and moisture present in the air across the globe. They say the new technology could have change the face of renewable energy with the potential to put the brakes on climate change by burning fewer fossil fuels.

The ‘Air-gen’ or air-powered generator contains tiny electrically conductive wires called protein nanowire, which are produced by microbes. The generator connects electrodes to the nanowires meaning electricity is generated from water vapour in the atmosphere.

“We are literally making electricity out of thin air,” says electrical engineer Jun Yao, who was behind the invention alongside microbiologist Derek Lovley. “The Air-gen generates clean energy 24/7.”

The new technology developed in Yao’s lab is non-polluting, renewable and low-cost. The pair claim it can generate power even in areas with extremely low humidity such as the Sahara Desert and has advantages over solar and wind energy because the Air-gen does not require sunlight or wind, even working indoors.

“The ultimate goal is to make large-scale systems,” adds Yao. “For example, the technology might be incorporated into wall paint that could help power your home. Or, we may develop stand-alone air-powered generators that supply electricity off the grid. Once we get to an industrial scale for wire production, I fully expect that we can make large systems that will make a major contribution to sustainable energy production.”

What is environmental crime and should you report it?