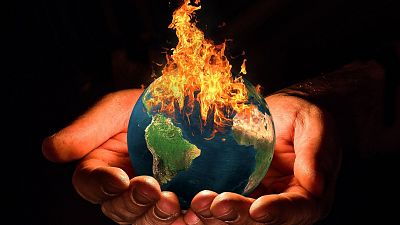 When it comes to crime reporting, the media’s coverage is decidedly human-focused. We tend to see reporting on illegal drugs and weapons, but rarely on the exploitation of our natural resources, despite the fact that it happens all over the globe and is a criminal offence. The problem is, environmental crimes are hard to track and hard to prove.

Arthur Paré is an environmental crime researcher who has made it his life’s aim to come up with solutions to ensure perpetrators are held accountable. Having grown up in Costa Rica, he spent his childhood immersed in nature, and after a first career in technology and investigating money laundering, he decided to focus on what he knew best – preventing the destruction of our natural world.

“I lived on the beach, going surfing and hiking every day,” he says. “Moving to the urban streets of Paris was a shock.”

Alongside a team of environmental lawyers at Géosmine in Paris, Paré works to expose crimes such as illegal wildlife trade, resource extraction and pollution. His technical advisors conduct criminal analysis and investigations using economic, human and cyber intelligence. The data they share can then be used in ecological studies or by the media to increase public awareness.

The map giving a voice to the voiceless

Paré’s latest feat is a tool called the Eco Crime Map, which allows anonymous users to report environmental crimes from wherever they are in the world. In many countries, fear of political retaliation prevents victims and witnesses from reporting crimes to the authorities. Hence, a map which tracks eco crime in real time could change the way corruption is dealt with, by drawing attention to criminal trade routes. So far - 178 crimes have been shared.

“The goal is to centralise data related to environmental crimes, obtain information to compare operating modes with other illicit industries and finally, to give a secure voice to the victims and witnesses of these crimes without risk of reprisals,” Paré tells Euronews Living, pointing to the map below.

If an online inventory exists at the click of a button, Paré hopes journalists, NGOs and authorities can make use of the data and expose the frightening volume of crimes committed.

Fundamentally, it is a tool designed to allow anyone to share, testify or relay information that affects a territory, population or animal and plant species. The information is 100% encrypted for safety reasons.

Is being able to report the crimes enough?

Dr. Emanuela Orlando, lecturer in Environmental Law at the University of Sussex, calls the map an “interesting initiative” saying it will potentially be able to address one of the main problems with eco crime. “Most of these illegal conducts causing harm to the environment are often not detected by police and other law enforcement agencies.” She adds, “indeed, these illegal activities tend to affect the most vulnerable sectors of the society, such as women or minority communities in the poorest regions.”

For Dr. Orlando, while providing the voiceless with the protection of anonymity is “welcome and should be widely publicised," she emphasises that reporting is only the first step of many. “Environmental crimes are a quite complex issue, particularly when this is linked to organised crime.”

She concludes, “for these types of crimes, an effective strategy needs to rely on a strong enforcement system” and institutional framework to properly address the corruption.

How many billions is the environmental crime industry worth?

According to Europol, the European Union’s law enforcement agency, the annual value of transnational environmental crime is estimated to be worth €63 to 192 billion euros annually. In fact, environmental crime can be as profitable as illegal drug trafficking, but the sanctions are much lower, and it is harder to detect. These factors make it highly attractive for organised crime groups.

Géosmine calls it “the most lucrative but least repressed illicit industry in the world.” Groups are known to orchestrate fake conservation programmes, for example, that waste millions of dollars in the process.

“Don’t buy pets online,” Paré warns. “Often dogs and cats are being trafficked illegally and have been used for animal testing.” There is even a new industry emerging called cyber poaching. “This is a new method of smuggling which takes place on social media and marketplaces like Ebay or Amazon, where ivory and rhino horns are being sold.”

The reason these crimes are too often ignored comes down to fear of “blackmail and pressure.”

Is environmental crime the same as ecocide?

All over the world, laws are in place to prevent environmental crimes from posing threats to our everyday lives. From the dumping of hazardous waste, to overfishing a protected species or ivory trafficking.

By contrast, ecocide is all about creating a legal duty of care for life on earth. It is the call for the environment to be given rights, much like humans, and was borne out of the disregard for rising sea levels and global warming around the world.

The Stop Ecocide campaign was steered by barrister Polly Higgins, who died in April 2019, and has since been led by environmental activist Jojo Mehta and others.

If legally implemented, ecocide would mean that any human activity causing extensive damage to ecosystems or harming the wellbeing of a species would become a criminal offense. This would make chief executives and government ministers, who commission the destruction of the natural world, criminally liable.

Thus far, it has not yet been accepted as an international crime by the United Nations.

Unlike the illegal trade in drugs and other illicit goods, “natural resources are finite and cannot be replenished in a lab,” states Interpol. “As such, there is a sense of urgency to combat environmental crime.”

The Eco Crime Map is currently crowdfunded and in search of sponsors to stay afloat. Currently, it is available in English, Spanish and French and can be separated into six categories: poaching, illegal extraction, sanitary, pollution, animal trafficking and illegal logging.