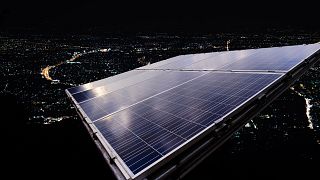 Specially designed panels could help solve the current problems with solar energy, by generating power once the sun has gone down.

The panels were discovered in 2020, when scientists at the University of California Davis, US, hit the mainstream.

The original study was conducted at Stanford University where a research team added a thermoelectric generator - a device that produces currents from temperature differences - to one of these particular solar panels.

They work by using the heat or infrared light radiated from the surface of the solar panel into space on clear nights.

“The solar panel turned out to be a very efficient thermal radiator,” says lead scientist Shanhui Fan. “So, at night, the solar panel can actually reach a temperature that’s below the ambient air temperature, and that’s a rather unusual opportunity for power harvesting.”

So, at night, the solar panel can actually reach a temperature that’s below the ambient air temperature, and that’s a rather unusual opportunity for power harvesting.

Traditionally solar panels, or photovoltaic cells, have suffered from the effects of changeable seasons and the fact that they don't work at night. From cloudy weather to dwindling day length, it's not just the dusk that stops them from providing a viable renewable energy source for people in many parts of the world.

The nighttime solar cells essentially work the same way as their daylight counterparts but in reverse. Every night, heat escapes the earth in the form of infrared radiation in order to keep the planet at a constant temperature.

In a statement posted on the University of California Davis website last year, Munday explained, “in these new devices light is instead emitted and the current and voltage go in the opposite direction but you still generate power.” The findings have been published in a research paper.

The nocturnal devices are able to generate up to 50 watts of power per square metre, a quarter of what conventional panels can generate in the daytime. They also work in the daytime if the light is blocked or if they are pointed away from the sun.

The nocturnal devices are able to generate up to 50 watts of power per square metere, a quarter of what conventional panels can generate in the daytime.

Some research even suggests that they could be used to harness the waste heat generated by machinery. "You have to use different materials but the physics is the same,” Munday explains.

Far from a new idea, people have been using similar technology to achieve nighttime cooling for hundreds of years. When you open your windows and doors after a hot day to cool down your house, you are using the same theory. Essentially this form of passive cooling uses the night sky as a massive heat sink, drawing warmth away from the earth once it gets dark.

“The nice aspect about this approach is that you essentially have a direct power source at night that does not require any battery storage,” added Fan.

In 2021, a project at Stanford University saw scientists similarly try to use the differences in day and night temperatures to generate electricity.

They managed to prove that the technology did work but there is a long way to go when it comes to efficiency and performance. These reverse solar panels may only be prototypes but a similar idea could operate around the clock providing energy in places with changeable weather conditions and low light levels.

The nighttime solar cells have the potential to be useful in off-grid locations for certain low-power tasks, but they are unlikely to replace existing energy infrastructure. However, Fan and his team say the set-up could be improved to generate more power.