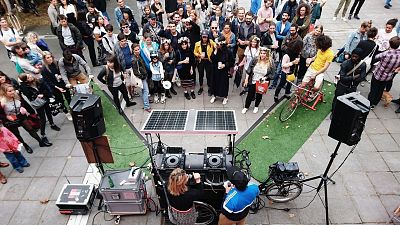 A French company called SolarSoundSystem is celebrating its 21st year of hosting solar and bicycle powered parties in Europe.

Partygoers have been attending the events since 1999, dancing to music all running on renewable energy.

The solar-powered sound systems started off in Lausanne, Switzerland, but have now taken off in France, with installations in Paris, Marseille and Biarritz. As the movement has grown, parties now take place all over the world in Berlin, the Basque region of Spain, Tel Aviv and even Hong Kong.

Keen to spread his ecological message far and wide, founder Cedric Carles says “it is necessary to perform in public space in order to increase the level of general knowledge and catch a public not concerned by climate change.”

How do solar and bicycle powered raves work?

Core team member Rubens Ben can get a party started virtually anywhere, setting up sound systems in parks, at festivals or street parties. The principle is simple, during the day batteries are charged by solar energy. These are attached to generators which allow the speakers to function and power the DJ turntables too.

Impressively, the sound quality is so high it can provide for up to 500 people.

In terms of how long the music can last, the team explain that even with partial sun/clouds, the machines can operate for 5 hours without bicycles and 6-8 hours with bicycles. With plenty of sun in the sky, the party can go on unlimited until dark.

Then at night, ravers are encouraged to take turns donating pedal power, by riding the bikes to keep the music going.

To mark the 20th anniversary of the parties last year, the eco-friendly sound system released a vinyl compilation of the electronic artists that have been playing on their systems over the years.

The chosen tracks pay tribute to the eight international artists who have supported SolarSoundSystem in the past, such as Jay Ka and Gregorythm. For every copy sold, a tree was planted in Peru via reforestation charity One Tree Planted.