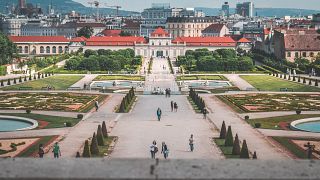 With its gilded State Opera House and lavish ball scene, Vienna is unequivocally musical – but does it sing ‘sustainable’? At surface level, the short answer is, no. The ornate façades of Austria’s capital, rendered in confectionary shades of sugar pink and sponge yellow, combined with a ‘museum city’ persona, give the impression of a chocolate box destination locked into its past.

Delve beyond the glossy veneer, though, and an earthier picture emerges. More than half of Vienna’s metropolitan area is made up of green space (from parks and formal gardens to flourishing allotments), part of which is 860 hectares of organic growing land, cultivated across three city farms. The city’s geographic location means that the freshest mountain water flows straight from the Styrian and Lower Austrian Alps through the city’s taps, while grape-festooned vineyards thrive within the city walls.

With this unique environmental makeup comes a passion for hyper-local, small-scale food suppliers. Vienna boasts a plethora of innovative artisanal growers and producers, many of which are supported by urban gardening initiative Karls Garten, Vienna’s first display and research centre for urban agriculture.

It’s worth noting, too, that Vienna is ultra-navigable, either by bike or via the city’s efficient public transport system. This is just one of the reasons why Vienna has been ranked the most liveable city in the world for the 10th year in a row by international consulting firm Mercer’s quality of life survey.

Here’s how to spend a green 48 hours in Austria’s capital.

With some 2000 parks and gardens to choose from, tourists are spoiled when it comes to green space in Vienna. Prater, the city’s largest public park, home to amusement grounds and the giant ferris wheel, is a good place to start. Biking through the changing leaves here in the autumn, before a few rounds of Austrian beer at Wiener Wiesn (26 September – 13 October), Vienna’s very own Oktoberfest, makes for a dreamy seasonal day out, as does a summer picnic followed by a ride on the ferris wheel.

The landscaped grounds of The Belvedere, which give the feeling of being in Versailles, are among the city’s most famous sites, but less well known is the Botanical Garden within the grounds of the University of Vienna. Established by Maria Theresa in 1754, the site is a joy to walk around, filled with over 12,000 types of plants from across the globe. Punctuated by ornate greenhouses and water features, the grounds are peppered with indigenous flora of Austria, along with medicinal and domestic plants, cacti and succulents.

For a wilder landscape, head out to the Vienna woods, which span the northwest and southwest of Vienna and are criss-crossed by meandering trails. Nicknamed the “Green Lung”, these densely forested areas are a UNESCO Biosphere Reserve and home to over 150 species of birds. If you catch the tram out to Bahnhofstraße, and then walk to Dehnegasse, you’ll come across a clearly signposted 7km trail that weaves through some of the prettiest stretches of woodland.

Explore the city on two wheels with Vienna Explorer

Escape central Vienna’s tourist trail on a comfy E-bike kitted out with durable tyres to help conquer those hilly vineyard trails. Highlights of the ‘**Go Green**’ route, led by one of Vienna Explorer’s friendly and informative guides, include cycling along the glittering curve of the Danube Canal (where you have the option of making like a local and having a quick swim), sweeping views of the city from Kahlenberg, the highest point in Vienna, and passing through the rolling terrain of historic vineyards, before finishing the route in Prater Park.

Forget the archetypal Viennese whirls, chocolates and pastries and instead give a show of support to one of Vienna’s small-scale growers and producers. That could mean sampling delicious local mushrooms cultivated in coffee grounds (unlikely sounding, yes, but trust us on this one) at Hut & Stiel, or picking up one of the delicious oils, balsamic or fruit seed vinegars produced by family-run vinegar distillery Gegenbaur. Alternatively, book a tour of Gugu Muck’s picturesque snail farm Wiener Schnecke, where visitors can eat garlic-slathered escargot with a cold glass of white wine as the sun dips below the horizon. Owner Andreas Gugumuck is passionate about reintroducing this historic delicacy to Vienna, which is proving popular with tourists and locals alike.

Vienna is the only metropolis in the world to have a cultivated a wine-industry within the city limits and heurigers – old-world wine taverns where local makers sell their wine during growing season – are a vital part of the culture. A pioneer of organic production methods is Weingut Zahel winery. Located in the south of the Austrian capital, the site is famed for producing local field blend Gemischter Satz, which can be enjoyed alongside traditional Viennese cakes and pastries. For those willing to venture further out, organic winery and restaurant Bio-Weinbau Obermann, tucked away in the village of Grinzig, offers live Schrammel music, breath-taking views and cosy vibes a-plenty. Back inside the city walls, visitors can sip uncommon grape variety blends under the shade of umbrellas in the leafy courtyard of organic wine producer Weingut & Heuriger Christ’s idyllic heuriger.