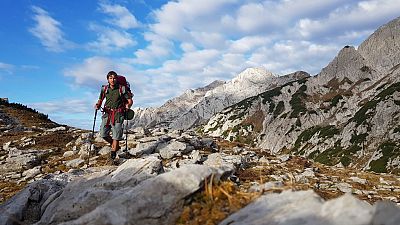 A fellow of the Royal Geographical Society, Richard Matthews is an adventurer, public speaker and mental health advocate. We spoke to him about his adventures on one of Europe’s less talked about hiking experience: the 600km Slovenian mountain trail.

What made you want to undertake this particular route? Why Slovenia?

“In January last year, I decided I would do a month-long walk somewhere. I thought I might circumnavigate Romania, but then realised that would be 3000 kilometres or something like that, which wasn’t feasible. I wanted to head away from the ‘normal alps’ where people go and to try something a bit different. I found a route through Montenegro, which was a week long, then looked at Portugal, where you can spend about a month going North to South - it would be a hard month, but doable. Then I discovered the Slovenian mountain trail and thought, “that’s it, done”. I didn’t really even read the route, I just thought that it would be fun. I’d been to Slovenia before and so knew it was interesting place. I went from there.”

Tell me a little bit about the your experience…

“Having done all sorts of trips I’m accustomed to planning things now. I made contact with the Slovenian Alpine Association https://en.pzs.si , and their website it incredible, as it has all the mountain huts available. I also contacted people in country to get their suggestions. I reached out to the couch surfing community, which was really helpful, and I met people early who taught me useful Slovenian phrases.”

“I was walking the Slovenian mountain trail. It’s a 600 kilometre and was actually the first transversal walking route set up in Europe in 1953. I wanted to get back to my roots, having spent the last three years doing some very large motorized expeditions I was heading back to the mountains and walking like I have for most of my life – I’ve been walking on Dartmoor and elsewhere for years.”

“I invited a few people to come along and was meant to have someone joining me but they backed out two days before we were due to leave. It went from being a dual-adventure to a solo one. I went out of season, which made everything more difficult. I didn’t complete the entire route, as it was dangerous to.”

What made it dangerous?

“In the Kamnik-Savinja and the Triglav National Park the route takes you through the high Alps, where there is no water, because it’s all limestone, the water just goes straight through it. You have to go hut to hut, but because I went in October all the high huts were shut, because there’s snow usually that time of year. All the huts were shut and because of the unusually hot weather there was no snow – I couldn’t get any water at all. It became a case of risk becoming a very large endangerment or deciding to not do that section. In June I’m heading back to do the bits I didn’t do.”

Apart from the obvious endurance element, what other challenges did you encounter?

“Biggest challenge was probably loneliness. Slovenians have a history of being outdoors and it’s part of their culture, but because I was going out of season I think four days was the longest I went without seeing another person. There was one day in particular where I lost it to a degree. I was sat up on a ridgeline and just wanted to quit. At that point I’d run into people but you can’t really have a proper conversation with someone who doesn’t speak your own language. It’s hard to express how you’re feeling. That builds over a time. Of course I ran into many great Slovenians and Germans, but at the same time I found it hard to get my point across.”

What advice would you give someone else wanting to take on a similar undertaking?

“Be prepared for something different. It’s a hard trek, it’s not like the West Highland Way for example, which is comparatively flat. The route has 33,000 metres of ascent and descent. It has via ferratas - bolted routes on the sides of mountains – and some technical mountaineering experience is needed. It’s not an easy route, but it’s certainly doable. Also, book huts in advance if you’re going in the summer.”

“Well I’m walking 50 miles in 24 hours across Dartmoor, to help raise signatures for a my friend’s Michelle’s campaign to guarantee suicide help in A&Es in the UK. I’m going back to Slovenia for two weeks to do the bits I didn’t do previously. I’m currently rebuilding my Nissan Micra and my friend and I are looking to take them to Nordkapp in the middle of winter.”

To find out more visit rmadventures.co.uk