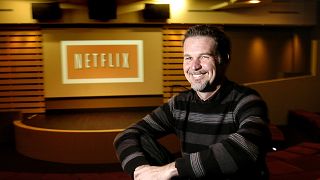 The CEO and co-founder of the streaming giant Netflix has officially stepped down.

Reed Hastings has passed over his duties to co-CEO Ted Sarandos and COO Greg Peters.

An MIT grad, Hastings worked in the tech industry and founded a troubleshooting software company in the 90s. Over carpool rides to work with employee Marc Randolph, the pair developed the concept of a rental service for movies.

Hastings said that one of the motivations came from a $40 Blockbusters fine.

Borrowing the impressive books model that Amazon had developed and jumping on the new lightweight technology of DVDs, the pair created Netflix in 1997.

Selling his tech company Pure Atria, Hastings invested $2.5 million into the idea. In the early days, Jeff Bezos offered an acquisition offer from Amazon for around $15 million. Randolph was apparently game, but Hastings turned it down.

The rise of a DVD rental service

In 1999 they changed to a monthly subscription offer. Take-up quickly grew and by 2003 the company was in profit. By 2005 they were shipping out a million DVDs every day.

One of the biggest innovations for Netflix was the creation of an algorithmic queue system to recommend the next DVDs a customer should rent.

Cinematch was launched in 2000 and further developed thanks to the $1 million Netflix Prize in 2006, given to anyone who could come up with a better algorithm. Ever since, algorithmic recommendations have been crucial to Netflix’s success.

Seeing the growing popularity of YouTube, Hastings pushed Netflix to pivot to its own video streaming service. In 2007, Netflix launched their video-on-demand platform and the version of Netflix we know today was born.

Netflix streams overtook DVD shipments in 2009 as the company focused away from the medium, looking towards the future.

From streamer to producer

The speed to which Netflix became a part of the new streaming model of television is thanks to the huge amount of money they were willing to quickly invest in the venture.

In 2010, Netflix agreed to a five-year deal for $1 billion to stream films from the major studios Paramount, Lionsgate and Metro-Goldwyn-Mayer. Buying the rights to shows like ‘Breaking Bad’ caused them to rocket in viewership. Partnerships with TV producers to feature Netflix buttons on remotes integrated them even more into the market.

They expanded their service to Europe in 2013. It was around this time that the company started investing in creating its own original programming.

While other companies were investing in streaming services, this was the first time one would become a studio in its own right.

Netflix’s first big self-produced hits were the original TV series ‘House of Cards’ and ‘Orange is the New Black’ in 2013. Under Hastings’ stewardship, investment in original programming sky-rocketed from there.

In 2017, the company announced intentions to invest $8 billion in original content for 2018 with the goal of half the service’s content being Netflix-produced.

With this massive investment, huge shows like ‘Stranger Things’, ‘Black Mirror’, ‘The Crown’ and ‘Formula 1: Drive to Survive’ were created.

But it’s not just TV. The company’s investment in original films has moved from a contentious point in the industry, with awards groups like the Oscars and Cannes snubbing their achievements for their non-traditional release patterns.

While the way Netflix releases have changed the cinematic release model in many countries is still a controversial matter in the cinema industry, the sheer amount of money they’ve invested into films has led to massive successes.

By attracting major directors who have struggled to get financing, Netflix films started showing up at awards seasons. Alfonso Cuarón’s Roma was the first Netflix film to be nominated for Best Picture at the 2019 Oscars. Since then, Netflix has had six more Best Film nominations from works by auteurs like Martin Scorsese, Noah Baumbach, David Fincher, and Jane Campion.

Hastings has also been a big proponent of a Netflix work culture. Employees aren’t given allotments of paid time off or sick days, and are expected to manage their time responsibly on their own.

How the mighty start to fall

While for much of the 2010s, Netflix was a Wall Street darling, seemingly unable to not rise in stock value, the cracks have started to show.

Growth in the pandemic years, with people relegated to their homes and more willing than ever to stream shows, meant a boost in the early 2020s. But in 2022, Netflix lost subscribers for the first time ever.

The market, once Netflix’s exclusive paradise, has been getting increasingly crowded.

Amazon Prime, Disney+, HBO Max, and Paramount Plus have all been nipping at the company’s heels, all creating their own content and flagship shows and pulling their content from Netflix’s servers.

In response to new challenges, Netflix introduced a lower subscription cost package that included adverts for the first time.

The idea is anathema to the original promise, a streaming service that allows the viewer to bypass traditional television's commercial breaks.

Over the past year, the company has also started dropping staff at an alarming rate.

There are also growing concerns that their initial investment model for producing original content isn't living up to its promise. Worried about wasting money on TV shows that won’t gain enough of a following, Netflix has become ruthless in culling underperforming shows after just one series.

Critics argue this method of focusing on early numbers is undercutting the art of slow-burn shows like early investment ‘Breaking Bad’.

More worryingly, if Netflix is in a tailspin and can’t invest vast amounts into original films and TV as often or as freely, then as the major studios refuse to invest in films outside of safe-bet blockbuster fare, who will fund interesting indie projects?

For now, new CEOs Sarandos and Peters have to sort out a 38 per cent share drop in the past year.

They can take solace in above-expectation subscriber numbers with recent hits like Glass Onion, ‘Harry & Meghan’ and ‘Wednesday’.

Netflix will start rolling out new features this quarter to try and convert more password sharers to paying subscribers, Peters said. He acknowledged it will not be a “universally popular move,” comparing it to a price increase that will increase cancellations for a time, but pay off with added revenue.