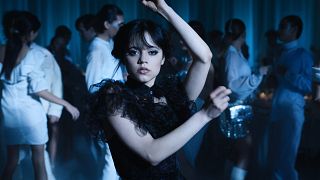 Day 13 of our Cultural Advent Calendar, in which we’re counting down our highlights of 2022 day-by-day all the way to Christmas and beyond. Our top TV and streaming pick today is 'Wednesday' (Netflix).

Right off the bat, I must confess that I don’t think that 'Wednesday', Netflix’s new spin-off of The Addams Family, is one of this year’s very best shows.

It may be the streaming behemoth’s most watched English-language show to date - booting 'Stranger Things' off the throne - but this first season, helmed by Alfred Gough and Miles Millar, tends to promise much and only half-deliver.

When I saw the teaser trailer for the first time, which features the eponymous Addams Family member dropping two sacks’ full of piranhas into a pool filled with swimming jocks who had bullied her brother, there was seemingly great potential for a show that seemed unafraid to lean into the darkness and deliver a gothic Mean Girls.

It doesn’t really achieve this and instead elects to be serviceable (and perfectly costumed, it has to be said) Gen-Z Addams Family-meets-Harry Potter by way of 'Riverdale', with all the melodramatic YA trimmings and a derivative Nancy Drew mystery that no one really cares about.

However, for all my bellyaching, 'Wednesday' remains some of the most fun I’ve had watching a new series this year - bar 'The White Lotus', of course.

It’s better than the new spin-off of that dragon show everyone can’t let go of (even if my esteemed Euronews Culture colleague does argue a good case); superior to whatever studio-mandated let’s-milk-the-udders-until-they’re-ashes Hobbit show they pissed away millions on this year; and a cut above anything Marvel gave us in 2022, with 'She Hulk' proving a bafflingly dull non-event, while the much-anticipated 'Moon Knight' failed to be the slam dunk one could have hoped for a series starring the ever-wonderful Oscar Isaac and his gorgeous locks of hair that inspire both roguish charm and a desire to swooningly nestle.

Granted, this probably is damning 'Wednesday' with the faintest praise that ever fainted, as Burton only directs the first four episodes and has increasingly been revealing over the years that his once-compelling brand of macabre storytelling focused on outcasts now feels conventional and falls into soulless parody. See: Alice in Wonderland, Dark Shadows, Miss Peregrine’s Home for Peculiar Children, Dumbo …

'Wednesday' breaks his mediocre streak and feels like a happy binge, chiefly thanks to one trump card: Jenna Ortega.

From her stoic looks and sardonic delivery, to the way she injects just enough humanity into her deadpan character so audiences can still care, there simply is no show without her astonishing performance as the unblinking princess of all things morbid.

Harsh, maybe, as the supporting cast (especially Gwendoline Christie and the excellent Emma Myers) do well with little to play with, but Ortega is what keeps you watching.

Especially when it comes to that unexpected Bob Fosse / Siouxsie Sioux-inspired dance sequence set to the tune of ‘Goo Goo Muck’ by The Cramps, which Ortega choreographed herself. The scene appears in something of a filler episode (Ep. 4 – “Woe What A Night”) and brilliantly pays homage to the original Wednesday Addams (Lisa Loring)’s dance in the 1964 TV series.

Watch it for yourself and tell me there isn’t some Beau Travail / Denis Lavant somewhere in there too:

Beyond cutting loose on the dance floor, the 20-year-old makes you forget quite how stacked the odds were against her; Christina Ricci – who also appears in this show – was a superb Wednesday in Barry Sonnenfeld’s Addams Family films, and is always a tough act to follow.

Moreover, Ortega actually managed to rewire – if temporarily – my brain’s critical facilities to bypass some of the show’s many faults and distracted me from the creeping sensation that the series’ expectation-defying success means it’s adieu to greenlighting more original ideas and bonjour to cynically milking pre-existing IPs for extra mileage until they’re dried-up husks.

Her performance is so spot-on that I simply focused on how great it is to be able to pinpoint that one film or show when you can say: “Yep, that’s their moment.” And this is it for Ortega, whose previous turns in this year’s infuriatingly-titled Scream and the excellent 70s-era slasher X already marked her out as one to follow. 'Wednesday' caps off one hell of a year for her, and if 2022 is anything to go by, you can expect to see a lot more from her. Especially since a second season has already been greenlit.

Let’s just hope that the show starts living up to its main star’s acting chops, cuts out the infuriating episode padding Netflix is so lunatically fond of, and gets the guts to go darker.

"If he breaks your heart, I'll nail-gun his," utters Wednesday during an oddly sweet moment in which the character shows her vulnerable side to her roommate.

'Wednesday' is on Netflix.