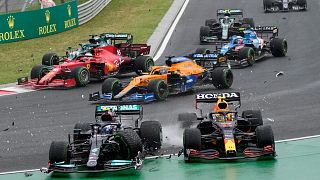 For many years, it seemed that Formula One would never pick up speed in the United States.

Between 2008 and 2018, eight new events were added to the sport’s calendar. Only one of these was in the US. But by 2023, three races on the roster will take place in the US – more than any other country.

It’s undeniable that Netflix’s hit docuseries ‘Drive to Survive’ has played a role in that growth by bringing the sport to a wider audience.

The streaming service used the brand new Miami Grand Prix to announce in May 2022 that the series had been commissioned for another 2 seasons.

So why did take a documentary series for one of the world’s most expensive sports to grow its fanbase in a country with a massive motorsport audience? And how will the shift towards the US impact the sport itself?

Formula One has regularly held a race in the US since the sport’s inception. Between 1950 and 1960, one race weekend was dedicated to the Indy 500, an endurance race of more than 800km, held at the Indianapolis Motor Speedway.

But F1 has never reached the rank of premier motorsport in the country, unlike in Europe, Asia and South America. Instead, US motorsport fans have always flocked to their domestic series NASCAR.

“Motorsport is really, really popular in the US. There’s no question of that,” motorsports journalist Hazel Southwell explains. “America just doesn’t really go for international touring sports in the same way that it does its homegrown sport.”

In such a big country, the demand for international sport is lower, but it’s not just a question of scale when it comes to why Americans failed to fall in love with Formula One.

“Whether rightly or wrongly, they basically think it's all a lot of snooty European stuff for which there's no way in. And that it's all a bit kind of fancy and tame compared to this perception of very raw motorsport in the form of NASCAR,” Southwell says.

F1 has long been a Eurocentric sport that prides itself on its elite nature, represented by races such as the Monaco Grand Prix, where 3-day Grandstand tickets start at €650 and a VIP pass for just the Sunday can go for over €3,000

Southwell also points to etiquette rules within the sport, such as the dress code at the British Racing Drivers Clubhouse in Silverstone, which stipulates types of trousers to be worn and bans hats indoors.

“There is no point pretending that, although it’s a global sport, it’s not incredibly entrenched within the specific Western European upper classes,” she says.

The course of F1 in America changed when, in 2017, US company Liberty Media completed an $8 billion takeover of the sport. They made it quickly apparent that their goal was to make Formula One relevant again.

One major issue affecting audience figures was broadcasting contracts; stuck in short-term profitable contracts for pay-to-view broadcasters, the sport wasn’t reaching new viewers. Realising how big an untapped market they had in the US, Liberty Media shifted its focus there.

In 2019, the company secured the sport a three-year media deal with ESPN, one of the biggest sports channels in the US. It also launched Drive to Survive with Netflix.

Drive to Survive has been immensely popular, renewed for a fifth and sixth series last week. Its base on Netflix has given access to the sport to legions of people outside of F1’s historic fanbase. “I’m not going to deny that Netflix was very important in this market for the growth and awareness,” F1 CEO Stefano Domenicali told Forbes.

"The Netflix show is a brilliant introduction to all the characters and storylines that are ongoing in F1, as you can just, you can watch the show, and then jump right into the next season and know exactly what's going on," says Stuart Taylor, video producer for motorsports social media channel Chain Bear.

She explains that the sport has changed how it interacts with fans by investing in digital mediums. "It’s in changing the tone of voice around F1 from being very po-faced and this sort of restrictive, disapproving uncle attitude, to being something that’s more open and more fun.”

All these strategies paid off. A global survey of viewership commissioned by F1 at the end of 2021 had the youngest sample since such records began in 2005, with 34 per cent of respondents under 24 years old.

Female participation was at an all-time high too, at 18.3 per cent of respondents – a significant jump from the 10 per cent recorded in the previous survey in 2017.

With F1 already having a US team on the grip with HAAS F1, Medland also believes an important next step would be to get an American driver in one of the cars.

"There's a lot of people that say that they don't need it, as long as they're the 20 best drivers," he says.

"That's true. But if one of those 20 best drivers is American, that people can properly get behind as one of their own, that would be massive." Medland cites how the popularity of Dutch 2021 world champion Max Verstappen is the reason for the creation of and huge attendance at the new Dutch GP.

Future of F1 in the US

With the inaugural Miami GP taking place last weekend, and a new street track on the Las Vegas strip coming in 2023, it seems like F1 has finally got into gear in the US. But the new tracks have not come without their criticisms.

The Circuit of the Americas track in Austin, Texas has been an undeniable success, with the United States Grand Prix boasting one of the biggest attendances of any Grand Prix in F1 since it was added to the calendar in 2012.

Comparatively, the Miami race had limited grandstands and entrance tickets, leading to a very small audience on site. This was a VIP-style event, with general admission tickets costing $500 (€518) and the most expensive experience tickets going for up to $80,000 (€83,000).

“It’s a statement event. It wasn’t really for people, it was for all of the sponsors to see that there was a big buzz around F1,” Southwell says.

With the Las Vegas Grand Prix next year taking place in an equally elite location, making it an event more akin to Monaco, is the US now embracing the very image that it had previously opposed?

As a tactic, it jars with the open approach Liberty Media has taken until now, Southwell believes. “If there’s a slight disconnect between the democratised way that people are getting into F1 in the US and the way that the new events are being added, it’s that."

There was already some controversy in the specific choice of location for the Miami GP. Unable to pick a street location in the popular Biscayne Bay due to complaints of disruption from residents, F1 instead settled for Miami Gardens.

"Miami Gardens is much poorer and much blacker than Biscayne Bay," Southwell explains. "This meant the residents couldn't fight it."

"It'd be quite nice to be able to have local people be able to attend and at least have some grandstand and general attendance tickets that didn't completely break the bank," says Chain Bear's Stuart Taylor.

"Florida is a big motorsports state. I'm sure they've got a lot of fans from things like Drive to Survive and people who tune in as part of this growing audience and who were completely unable to actually go and see the race when it was in their own back garden," he adds.

But is exclusivity in a US race such a bad thing if there is already a big event like the one in Texas to cater to fans, Medland asks.

"The Miami GP was a way of capturing a different kind of audience to the Austin one," he says. "Liberty Media has talked about wanting to make F1 races like a Super Bowl. But they also realise that not every race can be like that."

"Monaco is a flagship race that people want to be at regardless of how the racing actually is. You can create one of those in America, which is what they were trying to do with Miami."

With glamourous attendees like LeBron James and David Beckham, a beach club and an artificial marina, the Miami GP was catering to a different crowd as a way of bringing more money into the sport.

The expected windfall for the teams which receive a portion of the revenue is huge from an event like Miami. It's why Medland believes we saw more social media interaction around the track from teams in an attempt to make the venue a success.

"You had drivers and team principals doing a welcome party on Wednesday night at the circuit. You don't get that anywhere else, because at most circuits on Wednesdays, they're not even there yet."