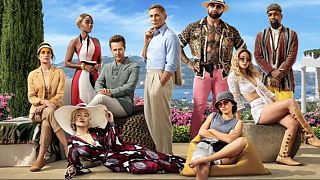 Sequels are a tricky business.

Just ask Rian Johnson, whose bold 2017 follow-up to the overly reverential Star Wars: The Force Awakens, The Last Jedi, made a portion of the internet want to Sith-kebab him.

No such risk for his second attempt at a sequel though.

Glass Onion: A Knives Out Mystery is, as its full title plainly states, a sequel to 2019’s Knives Out, Johnson’s masterful love letter to Agatha Christie and the whodunnit genre. It’s a new case, with new protagonists and the only link between the two films being the returning gentleman sleuth Benoit Blanc, a sexy Southern Columbo played to perfection by Daniel Craig.

As you can probably guess, things don't go according to plan once on the island; a guest ends up dying, and all eyes are on Blanc to crack the case.

To reveal anything more about the film would be to do it a great disservice, as Johnson has once again crafted newer ways to defy and disrupt the mystery conventions audiences are used to.

That said, this more grandiose, more self-reflexive and undeniably more fun instalment into the Knives Out anthology doesn’t quite have the same surprising punch as the denouement of the first. Glass Onion does, however, prove once more that Johnson is a master storyteller and understands that a stellar mystery, like a good magic trick, needs to be exist in a space between complex and seemingly solvable. Once the answers are revealed, the film shouldn’t feel like it has tricked the audience (see: the dross of the Now You See Me films) but rather peppered the clues in so ingeniously that it could have been figured out. And that’s where the image of the glass onion and its transparent layers is the perfect title and metaphor for this second detective story in the Blanc-verse.

There’s so much to love in this entertaining mix of Christie’s 'And Then There Were None' and Herbert Ross’ The Last of Sheila: the goofier tone, the cast all having a blast – with Craig, Monáe and Hudson standing out – and above all, the fact that it’s surprisingly timely.

Not in the cringey “I want to be relevant” sort of timely; rather in the nods it makes to the modern world, ones that ring true and serve as a sly satire on some of society’s more frustrating aspects.

So, much like Toni Collette in the first film was a send-up of Gwyneth Paltrow’s ridiculous Goop bullshit and the way seemingly liberal white women claim to want to help people but actually only seek out public approval, the character of Duke is a clear riff on Joe Rogan and the ultra-narcissistic Miles is a stand-in for the Elon Musks and Kanyes of this world. You know the ones - those pompous doughnuts who spout nonsensical buzzwords masquerading as forward-thinking, “you-need-to-get-on-my-level” illumination.

However, like Knives Out and its eat-the-rich subtext, Glass Onion is a modern mystery which does comment on the state of things without being enslaved to its commentary. Choose to read into it, and you’ll be rewarded with a cautionary tale about society’s blindness to rich and talentless buffoons; elect to stay purely on the mystery level, and you won’t miss out because the plot keeps you completely satisfied.

All that’s left to say is that Daniel Craig shouting “Shitballs!” in a Kentucky drawl should see everyone through the holidays with a grin on their face, and here’s hoping Johnson and Craig keep making Knives Out Mysteries films for years to come. On the strength of these two instalments, the mysteries will be worth it.

Glass Onion: A Knives Out Mystery is out now on Netflix.