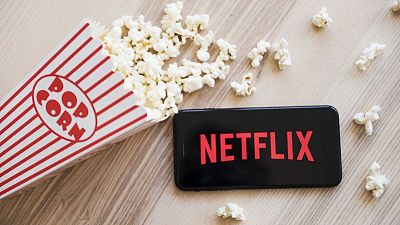 There might not be a European counterpart to Netflix, but the best of European cinema can be found on the American streaming giant.   -   Copyright  Canva
The opinions expressed in this article are those of the author and do not represent in any way the editorial position of Euronews.
By Giulia Carbonaro  •  Updated: 08/06/2022

Netflix has no shortage of European films and TV series, despite being a US platform.

Some of Netflix's most popular European TV shows in recent years have been produced by the streaming giant itself, including Italy’s 'Baby', Germany’s 'Dark', the French 'Call my Agent' and Spain's 'Élite'.

The same goes for cinema. The latest work by Europe's greatest directors has been released directly on the platform, including two Oscar-nominated titles.

This is no coincidence, as there is increasing pressure on Netflix from across Europe to support film-making in the continent.

In a May referendum, Swiss voters backed proposals to make TV streaming platforms, including Netflix, invest some of their locally generated revenue into the country's film industry.

The previous month Netflix signed a $45 million deal with French film guilds to create at least 10 French and European films over the next three years.

To celebrate European cinema, Euronews has put together a list of the eleven best European films available on Netflix.

Endless references to this film have been made since it came out in 2001 – testament to how revolutionary and popular this unconventional rom-com is.

'Amélie' is the quirky and heartwarming story of a woman who battles loneliness by trying to make other people happy, until she finds some joy of her own.

With its over-saturated colours, irresistible Frenchness and amazing soundtrack by Yann Tiersen, 'Amélie' is single-handedly responsible for having changed how contemporary audiences look at French cinema.

This story of love, sexual discovery and heartbreak between Adèle, a French teenager, and blue-haired art student Emma won the Palme d’Or in Cannes in 2013.

'Blue is the Warmest Colour' stirred some controversy at the time, particularly for its explicit 7-minute lesbian sex scene, and the fact it was directed by Abdellatif Kechiche, a straight man.

But the film has very high ratings online and was praised by many critics. It's definitely worth a watch.

Under the scorching Tuscan sun, seventeen-year-old Elio (Timothée Chalamet) falls in love with the charming, older foreign research assistant (the now infamous Arnie Hammer) hired by his father for the summer. Luca Guadagnino’s Oscar-winning film on youth, love, summer and discovery will have you dreaming of a holiday in Tuscany and make you sob as if your own heart had been broken. You’ll also never look at peaches the same way again.

In the outskirts of Paris, two friends dream of a better life that would get them out of the banlieues - at whatever cost. So the two girls start running a successful drug dealing business. 'Divines' is both powerful and tender in its portrait of the two protagonists, whose friendship and passion are quite contagious. Some of the scenes will make you dizzy with exhilaration and grip you with anxiety. It was director Houda Benyamina’s first film, and it won the Camera d’Or at Cannes.

Journalist Jep Gambardella has been writing about Rome’s fashionable high-life for decades, revelling into its luxury and excesses. Now 65 years old, he’s existentially bored of it, and he finds all those around him shallow and grotesque. Paolo Sorrentino paints a mesmerising portrait of Rome that’s as decadent as it is beautiful, with dazzling cinematography and superb acting from Toni Servillo as the protagonist.
Sorrentino’s latest film, Oscar-nominated 'The Hand of God', is also on Netflix, and it’s definitely worth a watch. Very different plot, same bizarre beauty.

A truly unique film, 'I Lost My Body' tells two stories in parallel: that of a hand looking for its body, and that of a young man in love. The film often appears macabre in a way that could be a little off-putting if the story wasn’t so tender and tragic at the same time.

This film caused quite a bit of controversy when it came out in 2020. Netflix received multiple requests to cancel the movie, which in the end it did in Turkey. The coming-of-age story of a group of teenage girls stuck in a reality that wants them constrained and helpless who find power and joy in dancing (and twerking) is a brilliant commentary on girlhood, the premature sexualisation of girls and the experience of being the children of immigrants in France.

This film is a difficult watch, but worth it to discover one of Italy’s most painful stories. 'On My Skin' follows the story of Stefano Cucchi, who died in police custody on October 22, 2009, seven days after being arrested. His body was in terrible condition and showed signs of violence, but the police denied responsibility, saying he had died because he was a drug addict. His family fought for years to uncover the truth about his death.

If you haven’t yet, go watch “Quo Vadis, Aida?” right now. This heart-wrenching story of a translator in 1995 Bosnia trying to get her family out of Srebrenica right as the massacre of Bosniak men and boys committed by Serbian troops is unfolding is devastating, but extremely important.

This Oscar-nominated film by Alfonso Cuarón tells the semi-biographical story of a family in Mexico City in the 1970s, based on the director's memories of his own childhood. The film is epic – anything you might want from a film, tragedy or comedy, is in it. Cuarón’s choice of shooting the film in black and white adds to 'Roma'’s timelessness and magnificence.

This film is such a gem of animation. 'Song of the Sea' tells the story of an Irish boy who finds out his apparently mute sister is actually a selkie: on land, she looks like a normal kid, but once in the sea, she transforms into a seal. The film revolves around an actual song, which is just beautiful and will likely get stuck in your head. It’s the second of an Irish folklore trilogy directed and co-produced by Tomm Moore.
The company behind this film, Cartoon Saloon, has also made another amazing film that you can find on Netflix, 'The Breadwinner'.

How to survive a robot apocalypse according to films