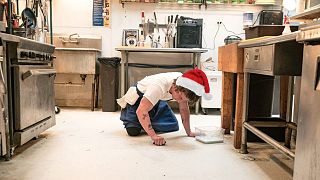 Day 14 of our Cultural Advent Calendar, in which we’re counting down our highlights of 2022 day-by-day all the way to Christmas and beyond. We're ending our favourite TV shows and streams of the year today with a banger: 'The Bear' (Hulu/Disney).

Fine dining is having a bit of a moment on our screens lately. It started with Boiling Point, the gritty single shot drama starring everyone’s favourite Scouser Stephen Graham.

In it, Graham tore up the screen as a shouty yet sympathetic head chef desperately trying to get his London haute cuisine restaurant working against all odds. And it really was all odds. Health warnings, nut allergies and rude customers weren’t in short supply in the pulse quickening drama.

More recently we’ve had The Menu. In this horror-satire, Ralph Fiennes is the shouty yet sympathetic head chef of a finer-than-fine dining restaurant as he treats his spoilt-rotten wealthy clientele to a meal to die for… (spoilers), literally.

For all of Boiling Point ’s anxiety-inducing tension and The Menu ’s thin-but-still-funny cynicism, there was one chef drama that stood head and shoulders above the rest.

The Golden Spoon of course goes to ‘The Bear’.

Debuting its first season this year, 'The Bear' follows Jeremy Allen White as Carmen ‘Carmy’ Berzatto, a working class Timothée Chalamet look-alike (aka hottest man ever) who has returned from a career in fine dining to take over the family sandwich shop after his brother’s suicide.

In the process, Carmy wars with his belligerent “cousin” Richard ‘Richie’ Jerimovich (Ebon Moss-Bachrach); jousts with upcoming talent Sydney (Ayo Edebiri) and vies to get the older staff Marcus (Lionel Boyce) and Tina (Liza Colón-Zayas) on his side.

Disaster after disaster threaten to destroy the restaurant - from money worries to insane service demands. And that’s without even touching on the overarching storyline of Carmy dealing with the grief of losing his brother.

I gave another glowing review of the show when it came out. This year has had many incredible shows, but the reason this one is in my best of 2022 is that it embraces a genre that’s almost overdone at this point and takes it to an entirely new level.

For all of Boiling Point ’s brilliance at articulating the unbelievably tough work of a night in a restaurant; and The Menu ’s arch skewering of the pretention surrounding restaurant culture, 'The Bear' captured something unique.

'The Bear' had all the pulse-raising service scenes of Boiling Point and sneered just as much at flashy gourmands; but it also celebrated the act of cooking like no other show.

Carmy and his crew’s dedication to making food that connects with people by bringing them joy is never forgotten from the drama of the show. All of the punishment of Carmy’s high expectations and difficult shifts are in service of something. Yes, there are tough moments. But 'The Bear' never ends on cynicism about the importance of food itself.

It’s telling that of the films and shows about cooking, this is the only one set in an affordable restaurant. 'The Bear' is a show about love, grief, family, community, AND the love of food.

With such a genuine backbone to the series, the drama of the show lands with a thud far greater than its imitators and the adoration for restaurants makes it feel closer to the passion of an Anthony Bourdain documentary than the high-drama offered elsewhere.

The Bear is available on Disney+.