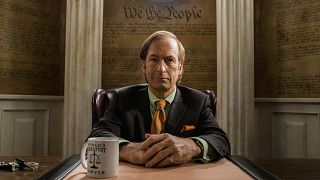 Day 10 of our Cultural Advent Calendar, in which we’re counting down our highlights of 2022 day-by-day all the way to Christmas and beyond. Our top TV and streaming picks continues with Better Call Saul - Season 6 (Netflix).

A few months ago, all I could think about was 'Better Call Saul.'

When I wasn’t actually watching it, I was reading Reddit threads about it or contemplating buying a University of American Samoa Law School sweatshirt, like the lead character’s.

Sometimes I can’t just enjoy a TV show - it becomes my entire personality.

This overwhelming obsession with 'BCS' caught me off guard because I, like a surprising number of 'Breaking Bad' fans, had slept on Vince Gilligan’s spin-off about sleazy criminal lawyer Saul Goodman until the final series aired this year. I’m still not sure why - maybe because it felt too slow at first; a novelty concept studied in fastidious detail.

Beginning in 2002, six years before the events of 'Breaking Bad', 'BCS' tells the story of Jimmy McGill, a down and out lawyer with a flare for sneaky schemes and showmanship. We know where his journey will end, as seen through each series’ black and white opening set in the present, but it’s watching him get there that’s so captivating. What does it take for a person to annihilate their moral compass?

The show is a masterclass in character study, with every detail revealing a rich new perspective on the 'Breaking Bad' universe. It’s also just beautiful to watch - the crisp colours of the cinematography; the deliciously kitsch Americana props; the way every perfectly angled shot makes the mundane moments just as exhilarating as the explosive drug cartel twists.

I could go on (and on) but instead I’ll simply summarise with: S’all good, man.

All seasons of 'Better Call Saul' are on Netflix.