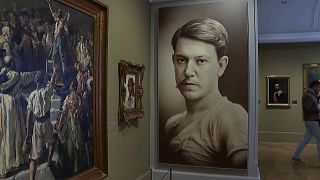 Sorolla Museum and the Sorolla Museum Foundation in Madrid are presenting the temporary exhibition 'Sorolla Origins', exploring for the first time, the path that led Joaquín Sorolla Bastida to become the national and international painter of Spain between the centuries as the immortal painter of light.

The presentation sheds light and the truth of the painter's beginnings in his native Valencia, on his training in the Schools of Artisans and in the Royal Academy of Fine Arts of San Carlos, which tells the story of a young man who combined drawing classes with work.

Organised in collaboration with the Museum of Fine Arts of Valencia, where it will later be exhibited, 'Sorolla. Origins' opens the cultural programme in commemoration of Joaquín Sorolla y Bastida's death.

The exhibition has been curated by Luis Alberto Pérez Velarde, who has carried out meticulous research work to illuminate the initial moments of the painter's life Sorolla. It reveals a Sorolla before Sorolla. It is therefore a very novel exhibition, in which most of the works are unpublished. It also incorporates a new painting into the painter's catalogue.

'Sorolla Origins' curator, Luis Alberto Pérez said, "here in Madrid is when he knew about the Prado Museum, when he knew about Velázquez, Ribera, Murillo, EL Greco, all the big painters from our past, and we can see this with his use of the colour (talking about Sorolla's technique), on portraits, and Velázquez's influence".

An exhibition at the Museum Barberini in Potsdam, south of Berlin, is exploring the connection between surrealist art and the occult.

"But what many don't know, is that surrealism is very concerned with old traditional occult science and pre-modern science like alchemy. And that is the focus here."

The paintings show landscapes and figures, but there is always an undertone of something darker. Something from another world.

"There are many pictures that are full of occult symbolism," says Daniel Zamani, a curator at Museum Barberini.

"Many surrealists were enthusiastic about the idea of the artists as a magician or alchemists, and they often painted themselves as magicians. There are pictures that built on the iconography of alchemy, the iconography of the tarot cards."

In "The Guest Room" by the American artists Dorothea Tanning, two children are in a small room.

One is standing naked, inspected by a small person dressed in headgear that reminds the viewer of the masks that medical practitioners would wear during the plague.

Another child is sleeping in a bed, holding a wooden doll. In the dark background, another figure wearing a mask.

Most people probably know of surrealism from the paintings by Salvador Dali, with melting clocks and desert landscapes.

But this is another type of surrealism, darker and scarier.

"Surrealism developed in Paris in the 1920's but then it grew internationally incredibly fast. In the surrealism exhibition of 1938, 60 artists were represented. We are showing here 23 artists from 15 different countries," says Zamani.

Surrealism is once again becoming popular and an inspiration to young artists across the world.

Part of it is the usual ebb and flow of popularities in the art world.

But Westheider also thinks it has something to do with the times that we are living through at the moment, similar to when surrealism was developed in the 1930's and 1940's.

"I think that painting today is once again focused on painting figures, so a lot of young artists are looking for this connection. But there is also the connection to the cosmos of chaos, with war and suffering and that concerns us," she says.

The exhibition "Surrealism and Magic: Enchanted Modernity" at the Museum Barberini, runs until January 29, 2023.

The 'Fondation Louis Vuitton' in Paris is lending its space to 60 energetic and enchanting pieces this winter.

The curators are showcasing the work of two giants in the art world, the founder of impressionism, Claude Monet and the American abstract painter Joan Mitchell, who were both fascinated by nature and its glorious colours.

The retrospective which fuses Monet's interpretation of landscape with Mitchell's exploration of memory and feeling is not to be missed and will run until March 27, 2023.