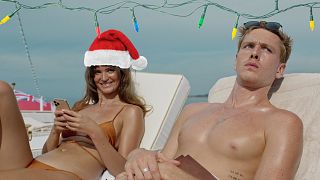 Day 21 of ourCultural Advent Calendar, in which we’re counting down our highlights of 2022 day-by-day all the way to Christmas and beyond. Our favourite films of the year list ends with Triangle of Sadness.

Pretty much every award and its aunt has been chucked at Ruben Östlund’s new film Triangle of Sadness.

The film made headlines first when it won the Palme D’Or at Cannes. It was the second Palme D’Or for Östlund who joins a handful of directors to have been awarded the distinction twice.

My lovely colleague recently attended the 2022 European Film Awards where he chatted to Östlund after he had essentially a clean sweep, winning four awards for Triangle including Best Film, Best Director, and Best Screenplay.

Once again with the EFAs, it was the second time in a row that Östlund went home happy. Previous Palme D’Or winner The Square won six EFAs, and was nominated for an Oscar and a Golden Globe.

Östlund is pretty much on top of the world for cinephiles. It’s no surprise then that Triangle of Sadness is showing up in Euronews Culture’s Best of 2022 list then, you suppose.

But I don’t think it deserves the awards it’s been given.

Where Östlund’s previous film The Square was an absolute deserving winner, I can’t help but reflect that Triangle of Sadness falls somewhat short.

When The Square came out, I was living with a friend who’d just started working in development for a similar art gallery to the one depicted. We howled together as it brutally tore apart the stereotypical high-art-wankers that populate the unreal world of fine art museums. The film managed to find its target with millimetre precision, eking out the cringe-worthy moments of their out-of-touch public interactions, their commitment to unpleasant and ridiculous art pieces, and finally the fallout from a PR disaster even they can’t manage.

It was a near perfect film.

In comparison, Triangle of Sadness falls short at almost every level that people have criticised it for.

The film follows supermodel couple Yaya (Charlbi Dean) and Carl (Harris Dickinson) on the most lavish holiday imaginable on a luxury yacht, alongside other wealthy guests.

The yacht, captained by Woody Harrelson, meets with some stormy seas and everyone’s perfect holiday is put at risk thanks to one disaster after another.

Spoilers from here on in.

Many critics have pointed out that the target of Östlund’s latest film is an easy one. The mega rich including aristocratic British arms dealers, a Soviet oligarch and vapid supermodels are hardly sympathetic types.

Östlund doesn’t really try all that hard to make them sympathetic, so the film also fails to create a broader tension outside of the simplistic satire. And while there is a final act twist that pits Östlund’s venom at humanity in general instead of just the currently wealthy, the message broadly remains at a single depth.

So why is it one of my film’s of the year, you ask?

Because nothing prepared me for the hilarity of the jokes, the gross-out emetic scenes, and the sheer excess of the approach.

Triangle of Sadness isn’t one of the cleverest films of the year. But it is definitely one of the most exciting pieces of cinema to behold.

Once again, Östlund had me in tears of laughter as I watched an early scene where Yaya and Carl bicker over the semantics of chivalry as Carl’s objects to paying for dinner.

Then, Östlund had me again at the pitch-perfect elderly British arms dealers. For a non-Brit to depict the subtleties of their awful classism was incredible. Even more incredible was them meeting their end later thanks to one of their own prototypes.

And then there’s the scene...

If you’ve seen Triangle of Sadness, you know exactly what I’m talking about. If not, I’ve already warned you about spoilers.

As the yacht pitches and rolls through choppy seas, the captain’s dinner becomes a vomit and diarrhoea-fueled nightmare. Few directors would be bold enough to depict the scene with such an unflinchingly scatalogical approach.

Fewer still would then turn it up a notch by accompanying the fever dream with Harrelson’s captain and Dimitry (Zlatko Burić), the oligarch who made his fortune in manure, taking over the ship’s intercom to trade quotes from famous communists and capitalists.

The rest of the film continues to heighten in insanity after pirates shipwreck the crew and the final act turns very ‘Lord of the Flies’.

But in terms of pure ridiculousness and brilliant surreal grotesque comedy, nothing will beat that hilarious wretch-inducing scene. It’s my cinema moment of the year.