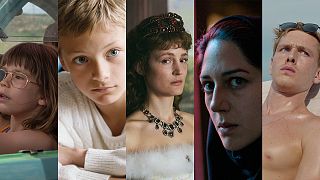 The much anticipated 2022 European Film Awards has come to an end in the Icelandic capital, Reykjavík. The event brought together some of Europe’s best filmmakers for what could only be described as a love letter to the craft.

In case you missed it, here is a list of the main winners:

• Ruben Östlund for Triangle Of Sadness

• Zlatko Burić in Triangle Of Sadness

• Ruben Östlund for Triangle Of Sadness

And, read on if you want to know who else was competing in the main categories for the European film industry's top awards.

The three films that lead the nominations this year, each tallying four apiece, were all 2022 Cannes winners: the Palme d’Or winner Triangle of Sadness by Swedish director Ruben Östlund, Close by Belgian director Lukas Dhont, and Holy Spider by Iranian-Danish director Ali Abbasi.

All three were competing for the Best European Film award, alongside Catalonian-Spanish director Carla Simón’s Golden Bear-winning Alcarràs and Austrian director Maria Kreutzer’s Corsage, which also had its world premiere at this year’s Cannes festival in the Un Certain Regard section.

While Simón’s gentle, sun-drenched drama about family life and loss during the final harvest on the family farm and Kreutzer’s historical drama about the Empress Elisabeth of Austria (brilliantly played by Vicky Krieps) increasingly rebelling against the constraints of her rigorous lifestyle are both worthy nominees, the odds seemed strongly in the favour of Östlund’s class warfare comedy. Triangle of Sadness was also nominated in three other categories: European director, European actor (for Zlatko Burić) and European screenwriter (Östlund).

The film is a broad strokes satire that targets the fashion industry, influencer culture, capitalism and the entitlement of the obscenely rich. It is a riot to watch but nonetheless feels scattershot compared to the director’s previous films Force Majeure and The Square, which also won the Palme d’Or in 2017. Still, there’s no denying its comedic credentials and audiences have responded well to the film’s absurdist, borderline Pythonesque moments.

Its status as favourite faced strong competition from Lukas Dhont’s Close, which tells the devastatingly tender story of two boys whose friendship is tragically broken (it shared Cannes’ Grand Prix with French director Claire Denis’ Stars At Noon) and Ali Abbasi’s gripping Holy Spider, which is based on the real-life story of an Iranian serial killer whose victims were sex workers. The wonderful Zar Amir-Ebrahimi won Best Actress in Cannes for her performance and is also nominated as Best European Actress alongside Vicky Krieps.

Both Close and Holy Spider are also the entries for their respective countries of Belgium and Denmark in the Academy Awards Best International Film category this year.

It is also worth noting that Venice winner Saint Omer (Silver Lion Grand Jury prize along with the Luigi De Laurentiis Lion of the Future award) picked up (only) one nomination for Best European Director for Alice Diop – a deserving nomination and a would-be merited win.

Her stunning feature debut is a nuanced and claustrophobic legal drama which chronicles the real-life trial of a Franco-Senegalese mother who committed infanticide. It has been selected as the French entry for the Best International Feature Film at the 95th Academy Awards next year and is hands down one of the most powerful pieces of cinema you’ll see all year.

The 4,400 members of the European Film Academy voted for the winners.

The winners of the Excellence Awards in the categories European Cinematography, Editing, Production Design, Costume Design, Make-up & Hair, Original Score, Sound and Visual Effects were determined by an eight-member jury consisting of representatives of the different arts and crafts.

The event was preceded this year by the academy’s inaugural edition of the Month of European Film.

The European Film Academy new public-facing event consists of a showcase of European cinema that took place in arthouse theatres and other venues in 35 countries across Europe.

The full nominations were as follows:

The European Film Awards 2022 was celebrated in Reykjavík, in the Harpa Conference and Concert Hall, together with various side events in connection with European film production.