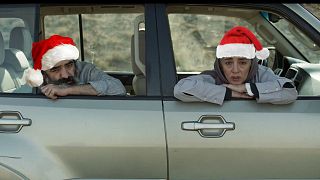 Day 16 of our Cultural Advent Calendar, in which we’re counting down our highlights of 2022 day-by-day all the way to Christmas and beyond. We're now in the third leg of the calendar, listing our favourite films of the year. Today: Hit The Road.

There have been some exceptional films this year that I have loved with minor-to-little-reservations: Wheel of Fortune and Fantasy, What Do We See When We Look At The Sky, Decision To Leave, You Won’t Be Alone...

And there’s Jaddeh Khaki (Hit The Road), a film I’ve seen three times now and I still can’t think of a single detail that I’d change or wish wasn’t there. It is, quite simply, a masterpiece.

The debut film by Panah Panahi – son of acclaimed Iranian filmmaker Jafar Panahi, who was sentenced to six years in prison by the country’s oppressive regime this year – is an equally heartbreaking and heartwarming family drama.

Set in the valleys of north-western Iran, Hit The Road sees a family embark on a cramped road trip in their SUV. We’re not sure why.

All we know is that they have left everything behind, that SIM cards need to be destroyed, and that the journey culminates with the couple’s eldest son (Amin Simiar), who is fleeing a prison sentence for an unknown crime, getting smuggled across the border.

Danger is lurking, but the mood is kept light, a bid from the older generation (Pantea Panahiha and Mohammad Hasan Madjooni, both giving career-best performances) to preserve the innocence of their youngest son, the six-year-old hyperactive agent of chaos raising hell in the backseat, played to perfection by newcomer Rayan Sarlak.

The political critique of Iranian society is present but seems to have been subtle enough to pass government censors. And thank the celluloid gods for that, as Hit The Road is a tragi-comic tour de force that has warmth and defiance to spare, one which culminates with a final shot that will leave you speechless.

I still haven’t fully recovered, and it is hands down my favourite film of 2022.