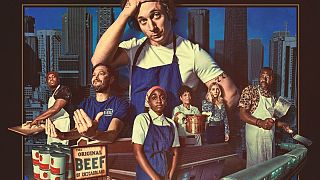 For the second leg of our 2022 Cultural Advent Calendar, we spent 7 days sharing our top TV and streaming recommendations of the year.

We’re onto our Film picks right now, but in case you missed it, here’s a quick recap of our Top Streams of 2022, with handy links to each review.

What we said: "There’s the usual sex, violence and, of course, dragons, that we’ve come to expect from this world. But it feels more toned down, putting slow storytelling and character development first and allowing us to become invested in all the granular details of George R.R. Martin’s imagination once again.”

What we said: "The breakout star (which is saying something in such a strong ensemble cast) is Aubrey Plaza as the deadpan wife of a newly-minted tech millionaire. Other highlights include Tom Hollander playing an ageing queer socialite, Meghann Fahy as a woman on the edge (or is she? Who can tell), a certain scene starring Theo James and what I assume is a prosthetic penis, and Michael Imperioli’s character being screamed at down the phone by his scorned wife.”

What we said: "The show is a masterclass in character study, with every detail revealing a rich new perspective on the 'Breaking Bad' universe. It’s also just beautiful to watch - the crisp colours of the cinematography; the deliciously kitsch Americana props; the way every perfectly angled shot makes the mundane moments just as exhilarating as the explosive drug cartel twists.”

What we said: "After nearly two decades of admiration for the cult show, what felt like hundreds of Buzzfeed articles dissecting all its problematic elements (too white, biphobia, the gender politics of it all etc), not to mention an extremely public feud between the show’s lead actors, I couldn’t help but wonder… Would it be any good? The result is a mixed bag…”

What we said: "While the themes of the show run deep and take many insidious turns, its overarching commentary on office culture and identity resonated with me a lot, especially as someone who, like many others, became a remote worker during the pandemic (and continues to be - I’m writing this from bed right now!)”

What we said: "There was great potential for a show that seemed unafraid to lean into the darkness and deliver a gothic Mean Girls. It doesn’t really achieve this and instead elects to be serviceable (and perfectly costumed, it has to be said) Gen-Z Addams Family-meets-Harry Potter by way of 'Riverdale', with all the melodramatic YA trimmings and a derivative Nancy Drew mystery that no one really cares about. However, for all my bellyaching, 'Wednesday' remains some of the most fun I’ve had watching a new series this year.”

What we said: "With such a genuine backbone to the series, the drama of the show lands with a thud far greater than its imitators and the adoration for restaurants makes it feel closer to the passion of an Anthony Bourdain documentary than the high-drama offered elsewhere.”

Did we get it right? Which shows should have made our Top 7? Let us know.

Happy discovering, click here for the Music Roundup of 2022, and stay tuned to our daily 2022 Culture Advent Calendar for the rundown of our highs and lows of this year.