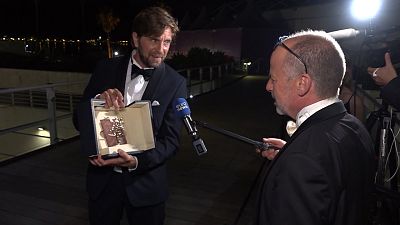 The 75th Cannes Film Festival wrapped up on Saturday evening with many European films winning awards.

The Palme d'Or went to film director Ruben Östlund for 'Triangle of Sadness', which joins the closed circle of double winners after receiving his first award in 2017 for 'The Square'.

We find in the film the same acid and uncompromising humour about the world of the powerful.

Take a luxury boat, a Russian multi-billionaire, a Marxist American captain, and a couple of money-obsessed influencers, and you get a yacht that looks like the Titanic.

"What happens in the film is that the luxury yacht with the billionaires and the models goes under, and they are flushed up on the beach, on a desert island," explains Östlund. "And what happens there is of course that all hierarchies are gone. And it's a lot of fun when to kook when the hierarchy is shifting over."

The film will be released in Europe in the autumn.

The Grand Prize is the most important prize after the Golden Palm and it went jointly to the young Belgian director Lukas Dhont and Claire Denis for 'Close'.

"We are a unique country with several languages, so for me, it's important to make a film that combines several languages too, as you say, break the boundaries a bit, explains Dhont. "I think that too often we think in this "box" of a language, and I think I want, as with everything, to break its boundaries and actually make a film where several things can exist next to each other."

'Close' is an ode to tenderness, which closely follows two childhood friends and their journey to adolescence.

Another Belgian film which received an award was 'Le Otto Montagne' which received the Jury Prize. It is co-produced by two people who are a couple in life and behind the camera.

"It was a dream to do a very European film," explained Charlotte Vandermeersch, co-director. "Yes, it makes sense to do it like that, united in Europe."

Le Otto Montagne is the story of two men who grow up together in the beautiful landscape of the Aosta Valley in Italy.

While Bruno remains faithful to his mountain, Pietro travels the world. On their journeys, they experience love and loss, their origins and destinies, and above all, find out what it means to be friends for life.

The actor is very well known in her country after fleeing Iran for France in 2008.

"This is really a message," Amir-Ebrahimi said. "They wanted to take me away from my country, they wanted me not to exist, not to work, not to expose myself... but I am here, and I have this prize, and it's a strong message anyway!

Holy Spider immerses us into Iranian society through the eyes of a journalist played by Zar Amir-Ebrahimi who investigates a serial killer of prostitutes.