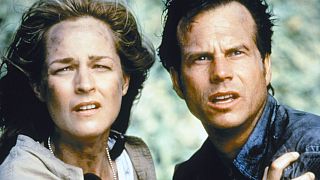 The sequel to the 1996 disaster epic Twister has been greenlit and will be released theatrically in the summer of 2024.

As if that wasn’t exciting enough, they’ve taken a leaf out of the Alien franchise’s book and calling it Twisters.

On directing duties is Lee Isaac Chung, who previously directed the Oscar-nominated family drama Minari, and the screenplay will be written by Mark L. Smith, who co-wrote the Oscar-winning film The Revenant.

The original film, directed by Jan de Bont (Speed), had a production budget of up to $92 million, which made it one of the most expensive movies made in the 90s. It boasted then-groundbreaking special effects and was a massive box office hit, raking in nearly $500 million globally. It was the second biggest hit that year behind Independence Day (which earned $817.4 million), and received Oscar nominations for Best Visual Effects and Sound.

It starred the Helen Hunt, as well as the dearly missed Bill Paxton and Philip Seymour Hoffman, as storm chasers. The new chapter has been described by Universal as “a new chapter from the 1996 movie”, but plot details remain vague.

Why should we care?

Well, putting aside what you may think of the film, Twister has a place in movie history as it was the very first film to be made commercially available on DVD in the US.

It was pressed and released for sale in DVD format on 25 March 1997, one day after the Oscars.

Because of its state-of-the-art special effects, it was deemed to be the ideal film to introduce a new home entertainment medium, which promised consumers an enhanced viewing experience - as well as end the reign of the VHS tape.

Twister went on to become the top selling DVD in 1997, with its new-format competition including the likes of Mars Attacks!, Blade Runner, Eraser, Interview with the Vampire, Se7en, The Birdcage, Goodfellas, A Time To Kill, The Mask, The Wizard of Oz and The Fugitive.

It wasn’t strictly the first DVD production, as several companies in the US were using the technology for visual effect projections and presentations in late 1996. Also, the first DVD players and discs were available in Japan in November 1996. But Twister can still claim to be the first cinematic feature film commercially available on DVD.

Europe would have to wait until March 1998 for the first DVD release and to be able to enjoy Twister in all its high-def glory.

Twisters is released theatrically on 19 July 2024.