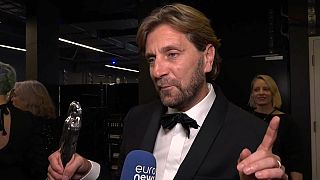 The anti-capitalist satire from Swedish director Ruben Östlund's Triangle of Sadness has dominated the 2022 European Film Awards, which received the top prize and three others, while Spain's Fernando León de Aranoa's The Good Boss was crowned Best Comedy of the Year.

Östlund, the 2017 winner of the EFA's Best Film award for The Square, picked up the top prize again, in addition to Best Director, Best Screenplay, as well as giving one of his actors, Croatian-Danish Zlatko Buric, the Best Male Performance award.

His film hit the screens after receiving the Palme d'Or at this year's Cannes festival.

To find out more, click on the video above.

Here are the 5 films nominated for the LUX Audience Award