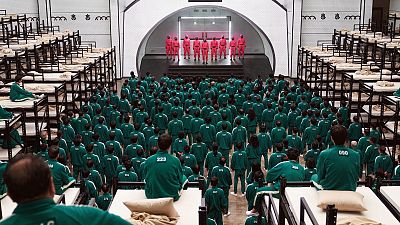 Netflix is looking for a crop of broke hopefuls to compete in a round of deadly children’s games for the chance for a cash prize.

The streaming giant announced today that it was bringing global hit ‘Squid Game’ to life with what it terms “the biggest reality competition ever”: ‘Squid Game: The Challenge’.

Netflix is looking for 456 players to enter a round of games inspired by the hit Korean show - plus some new additions - for a life-changing reward of €4.3 million.

One key part of Hwang Dong-hyuk’s original scripted drama is missing however; no applicants will be harmed during the contest.

“Squid Game took the world by storm with Director Hwang’s captivating story and iconic imagery. We’re grateful for his support as we turn the fictional world into reality in this massive competition and social experiment,” says Brandon Riegg, Netflix VP of Unscripted and Documentary Series.

“Fans of the drama series are in for a fascinating and unpredictable journey as our 456 real world contestants navigate the biggest competition series ever, full of tension and twists, with the biggest ever cash prize at the end.”

What will the new ‘Squid Game’ reality TV show be like?

The prize for ‘Squid Game: The Challenge’ is the largest in reality TV history, intended to put strategy, alliances and character to the test.

The series will have 10-episodes and will be filmed in the UK, however an international cohort of competitors is sought by Netflix.

‘Squid Game’ holds the record as Netflix’s most popular series of all time, with over 1.65 billion view hours in the first 28 days after its September 2021 premiere. The cast, already famous in Korea, were catapulted to global fame due to the show’s reach.

‘Squid Game’ was recently renewed for a second season, a rarity in Korean media.

Recruitment is open now at SquidGameCasting.com. For this round, the Front Man is in search of English-language speakers from any part of the world.