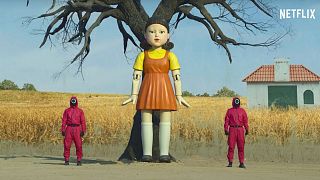 If you’ve logged in to Netflix this week, it’s likely you’ve been shown a clip featuring strange masks and swathes of people in teal jumpsuits: welcome to Squid Game.

The survival thriller is currently the most-viewed TV show in nearly 80 countries, making it the first original Korean series to top the charts.

Until this month, the biggest non-English Netflix series of all time was Money Heist, a Spanish crime drama now into its third series.

Netflix is notoriously tight-lipped about its viewing figures, measuring its audience data through nonstandard metrics (namely whether people have watched at least two minutes within 28 days).

The period drama Bridgerton, released last Christmas, is currently the most-watched series on Netflix as it reached 82 million households within its first 28 days.

Squid Game is still a way off the 28-day mark (it was released on 17 September), but the insiders at Netflix think it’s likely to overtake Bridgerton.

“[There’s] a very good chance it’s going to be our biggest show ever,” adds Sarandos.

What is the premise for Squid Game?

The show is a dystopic horror about people taking part in a deadly tournament. The desperate participants, all facing serious financial hardship, are tricked into participating in a series of twisted children’s games like tug of war and marbles.

It’s the brainchild of South Korean director and screenwriter Hwang Dong-hyuk, who wrote and direct all nine episodes.

Viewers and critics alike have responded positively to the series, while also acknowledging its visceral and savage violence.

Some have compared Squid Game to the 2019 Oscar-winning film Parasite, which explored the deep financial division within South Korean society, as the series touches on similar themes.

One of the big advantages Squid Game has over other foreign-language series is that it has been released worldwide with a dubbed version in English.

In comparison, Call My Agent, a French comedy series with huge popularity in the UK and the US, is only available with subtitles. While subtitles clearly haven’t held the show back, it’s likely that Squid Game may not have had the same success without the English dubbing.

Will there be a series 2 of Squid Game?

Despite the show’s extraordinary success, a second season of Squid Game is looking unlikely.

The creator, Hwang Dong-kyuk, is a filmmaker predominantly and told Variety he planned to return to working on features.

“I don’t have well-developed plans for ‘Squid Game 2,’” he says.

“It is quite tiring just thinking about it. But if I were to do it, I would certainly not do it alone. I’d consider using a writers’ room and would want multiple experienced directors.”

So it's not completely out of the question - but don't expect a second season any time soon!