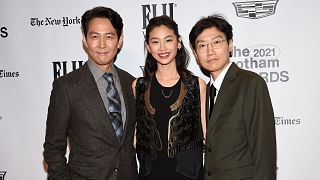 "I watched some of it. I loved it. It helps me to promote the show too, so please more – I want more people to do it," he said.

A controversial life-sized remake of the games made headlines this week after online video creator MrBeast – real name James Donaldson – spent several million dollars recreating all six challenges for 456 people to play in.

His video has received 122 million views in five days.

Dong-Hyuk gave his seal of approval at the Gotham Awards, where Squid Game took home its first major US accolade for Breakthrough Series.

'Flustered but happy' over show's success

Model-turned-actor Jung Hoyeon had her first acting gig in the Korean Netflix series and is now ready for another role.

In the meantime, she's signed with CAA and models for Louis Vuitton. Jung said she feels "flustered" by her new success.

"It's always a pleasure to see so much love and support being thrown my way," said Jung.

"But there are so many firsts that I am currently going through, I'm a little bit flustered but overall very, very happy and grateful."