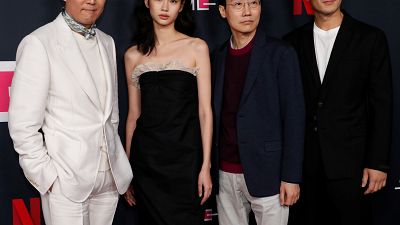 The cast of 'Squid Game' have been catapulted to global stardom despite already being famous in South Korea   -   Copyright  Mario Anzunoni/REUTERS
By Tim Gallagher  with Reuters  •  Updated: 13/06/2022

Fans of hit show ‘Squid Game’ will soon be treated to a rare second season of the dystopian series courtesy of Netflix.

The streaming service made the announcement on Sunday June 13, saying the season would be exclusive to its platform.

South Korean TV shows are usually one-offs and it is practically unheard of for two seasons to be commissioned.

‘Squid Game’ became Netflix's most-watched series when it was released in September 2021. The show tells the story of cash-strapped contestants who play childhood games for a chance of life-changing sums of money. It inspired countless memes, Halloween costumes and copy cats.

The show is one of many recent South Korean exports including k-pop group BTS and Oscar-winning film ‘Parasite’ that mark the so-called ‘Korean Wave,’ a soft power initiative by the Korean government.

What will happen in Squid Game season two?

Writer and director Hwang Dong-hyuk teased a few details about the show's second season in a letter released by Netflix.

Characters Gi-hun and The Front Man will return, he said, and "the man in the suit with ddakji might be back."

"You'll also be introduced to Young-hee's boyfriend," he added.

Young-hee is a motion-sensing animatronic doll featured in one of the games that inspired terror and humour on the internet.

The first season captured the public with its searing critique of capitalism in a country which has some of the highest rates of burnout in the world amongst its workforce.

Netflix did not say when the new season would be released.