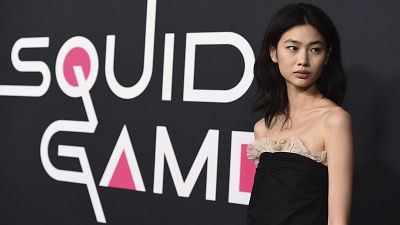 “Squid Game” is officially Netflix’s most watched show or film ever.

On Tuesday Netflix rolled out a new website that measures its most-viewed films and series' by the amount of hours users spend watching them.

“Squid Game” came top with 1.6 billion hours viewed. The satirical show about a group of indebted contestants battling it out in a deadly contest, all for the entertainment of a group of wealthy elites, has proved a smash-hit around the world.

According to the streaming service's new metric, Rawson Marshall Thurber's "Red Notice," starring Dwayne Johnson, Gal Gadot and Ryan Reynolds, has been watched for 148.7 million hours globally since it debuted Nov. 12 on Netflix.

In the past week, the most popular series was season three of "Narcos: Mexico," with 50.3 million hours viewed.

In the past, Netflix has been selective in sharing viewership data but from now on every Tuesday, Netflix will update the site "Top10 on Netflix" with the top 10 series and films on the streaming service.

What is Netflix's new metric?

The ‘hours viewed’ metric replaces the previously used ‘views’ which could mean only a few minutes of a show had been watched before users switched off. Other streaming services like Amazon and Disney+ do not regularly release data on viewing figures.

"This is an important step forward for Netflix, the creators we work with and our members," Pablo Perez De Rosso, a vice president for content strategy at Netflix, wrote in a blog post on Tuesday.

"People want to understand what success means in a streaming world, and these lists offer the clearest answer to that question in our industry."

The current most popular film on Netflix is Sandra Bullock’s 2018 film “Bird Box” at 282 million hours viewed. “Red Notice” could knock it off the top spot this year despite poor reviews.

Rare Serge Gainsbourg painting worth €30,000 to be auctioned in Paris