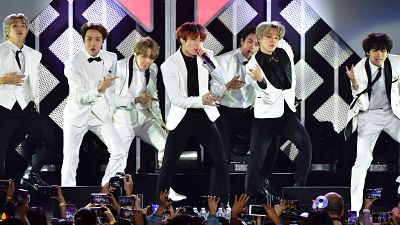 K-pop megagroup BTS is going on hiatus, the band announced on the ninth anniversary of their formation. The news shook K-pop fans around the world.

BTS is the biggest group in its genre and the announcement even caused its label’s value to plummet in the Seoul stock exchange.

One of Korea’s biggest cultural exports, BTS has enjoyed almost unparalleled success across the world, having sold over 32 million albums.

The band members say they’re “exhausted” and want to focus on individual projects.

Chatting around a table stocked with wine and beer, band member RM tearily explained that they “don’t know what band they are.”

“I always thought BTS was different from other groups (...) but the problem with K-pop and the whole ‘star system’ is that you don’t have time to mature,” he continued.

“It’s not that we’re ending the band,” bandmate Suga explained. “We’re just living separately for a while.”

In response to the dramatic drop in share prices, the band’s label HYBE announced that the band members would continue to work, but on “parallel individual and team projects.”

Still, the news has left the K-pop world reeling.

How did BTS take over the world?

BTS launched in 2013 with its seven members, J-Hope, Jimin, Jin, Jungkook, RM, Suga and V all picked up through auditions or recruitment.

Despite their sudden appearance, the septet had been intensively training for their debut since 2010.

The first time the public heard them was in a collection of clips released in late 2012 that had the members rapping in Korean and English.

They didn’t become immediate stars after the release of their first single, ‘No More Dream’, but between 2013 to 2017, they quickly grew in popularity in their home country South Korea.

A shift to more confessional lyrics and openness through social media saw singles ‘I Need U’ and ‘Dope’ grab tons of domestic fans and begin to grow an international fanbase.

Their 2018 album ‘Love Yourself: Tear’ became BTS’s biggest selling album to date debuting at number one in the US Billboard 200, the first K-pop album ever to do so.

They would later become the first South Korean group to top the American singles chart with 2020 hit ‘Dynamite’, performed entirely in English.

BTS are now the most streamed group on Spotify ever with 'Dynamite' attracting more than 101.1 billion views within 24 hours of its release, a world record.

Although they may seem to be simply a boyband, the group has been a massive part of how South Korea has been understood on the world stage in the past decade.

In 2018, BTS was invited to speak before the United Nations. Speaking at the launch of a UNICEF campaign for young people, RM urged listeners to be themselves and “speak out” regardless of their race, gender, or identity.

In June 2022, the group met with US President Joe Biden, to condemn anti-Asian racism. Their appearance at the White House briefing room brought more than 300,000 viewers to the White House’s YouTube channel.

They are one of the only groups since the Beatles to release four albums that reached number one in the US within two years.

BTS has become the leading K-pop band in an era where the genre has taken over international music.

In Europe, Brits are the biggest K-pop fans, ranked 11th country in the world for streaming numbers. Meanwhile, France saw a 13 per cent increase in K-pop streams between 2019 - 2020.

Part of BTS’s rise to fame has been down to ‘Hallyu’ or ‘Korean wave’ in Korean. It’s the term for the South Korean government’s concerted effort to become a greater exporter of its culture and media.

BTS’s success has been alongside Bong Joon-ho’s film ‘Parasite’ sweeping the awards at Cannes in 2019 and the Oscars in 2020, ‘Squid Game’ bringing viewers by the bucketload to Netflix last year, and other K-pop bands like Blackpink rising to international stardom.

Although this isn’t the first time BTS has announced they are taking a break - they took time off in 2019 and 2021 - this time feels more final as J-Hope insists the group “needs a change” and wants to “start a new chapter”.

Nothing official has been announced for the band’s future, but with the label saying they will work on individual projects fans are already speculating about solo careers like the boys from One Direction.

Breaking up to join the army?

There's also a chance the split has been spurred on by a military service requirement of the members.

In South Korea, men under the age of 30 have to complete two years of military service. Jin is the eldest of the group at 29 and has to enlist next year or risk prison.

Although South Korea does grant some exemptions to the conscription rule, it is usually afforded to athletes and not pop stars.

“The system has been operated meaningfully to give those who have enhanced the national status based on their excellent skills more chances to contribute to the country, and there is no reason the popular art-culture field should be excluded from this.”

And the members have not showed signs of disagreeing with the rule. "As a young South Korean, I believe that military service is a natural course. And as I have always said, I will answer my country's call when it comes," Jin said in 2020.