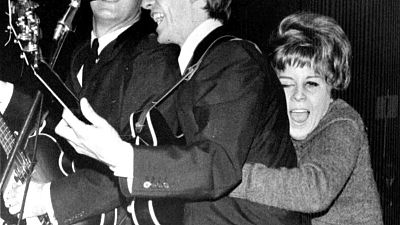 From allegedly licking the toilet seat of K-pop superstar Jimin to the disgruntled Beatles fan Mark Chapman tragically killing John Lennon, the world of fandom can be a strange and disconcerting place.

Taking a quick glance at fandom on Urban Dictionary only adds to this bewilderment. The word has variously been defined as:

"An innocent name for a giant cult of over-obsessed internet addicts and sleep-deprived freaks."

"The satanic cult that will destroy you and everything you love."

"A group of people who willingly have their souls devoured by an obsession."

(And these are the polite ones).

But what actually is fandom? And are some people right to be worried about it? Euronews spoke to two experts about the subject to find out more.

'The thrill of being a fan'

Away from the murky world of Urban Dictionary, fandoms are a group or community of people who share a common interest in a band, video game, book, film, TV show or specific topic - you name, there is a fandom for it.

Lots of fandoms organise themselves both online or in person, while others rework their passions into fan art or fiction.

According to Dr Lynn Zubernis, a clinical psychologist at West Chester University who has published four books based on her research on the psychology of being a fan, fandom is rooted in human evolution, which hardwires us to seek repeated experiences and like-minded people who share our passions.

"Our brains are built to become deeply connected to outside entities," she told Euronews, explaining the brain's mesolimbic system - which releases dopamine - functions to reinforce what we like and what we want.

In other words: when we like something, we want more of it.

"[This] system developed to help us find our next meal, not anticipate our next concert, but when we like something a lot, we want it again as soon as possible," says Dr Zubernis, who also chairs the Stardom and Fandom group of the Southwest Popular Culture Association.

Some of the main positives of fandom are that it provides people with a sense of belonging, identity, and can inspire creativity. And, as simplistic as it sounds, a major benefit of fandom is fun.

"Attending a concert of a favourite band, for example, provokes intense emotion," says Dr Zubernis. "Music stokes the brain's pleasure centre - some music fans describe going to a concert in almost religious terms, complete with tears and pounding hearts and feeling like no words can adequately capture the experience."

Research also suggests that fandom allows people to experiment with identity and express themselves more freely, such as by pursuing creative activities like art, writing or costuming.

Other academics have argued that creating relationships with fellow fans and celebrities (even if remote and one-sided) can contribute to a sense of belonging.

'Fans are human, after all'

Yet there is a darker side to fandom.

As the earlier examples indicated, fandom can create alarming - if not toxic - behaviours among some.

"Groups are partly defined by having some enemy to hate and by defending your own in-group," Dr Zubernis told Euronews. "In fandom, this is sometimes another faction of fans."

She adds that this can lead to aggression as groups of fans attack others who they feel are a threat, while there may also be infighting within groups as individuals jockeying for position in its hierarchy.

Elvis tribute artists, who often describe themselves as mega fans of the King, have documented much in-fighting in their scene, with members arguing over what is the true interpretation of Elvis.

However, Dr Mark Duffett, senior lecturer in Media and Cultural Studies at the University of Chester, claims some of the negativity towards fandom stems from how they are discussed in the media.

"The mainstream media tends to treat fans as a kind of monstrous other," he says, with journalists "taking it upon themselves" to find the "latest social anxiety" in the fan community.

Amid the screaming hysteria around bands like the Beatles during the 1960s, these social anxieties surrounded the alleged sexual permissiveness of fans, who were variously stereotyped as groupies.

Nowadays, worries surrounding fandom are about things like group surveillance, burn-out, and collective action online, according to Dr Duffett,

Added to this, he says, audience members who do something strange are often labelled as fans because there is no other term available.

"In general, fandom is an ordinary activity for normal people, it is the media that fixates on attempting to locate fandom as deviant behaviour rather than it being anything typical or essential to fandom itself."

Journalists do also highlight what they consider to be the positive aspects of fandom, a notable example being when K-pop superfans criticise racism online and battle right-wing conspiracy groups, such as QAnon.

Whatever the case, the jury is still out on whether fandom helps or harms those concerned, with much depending on individual experiences.

"Spending money to go to a concert that feels like a once-in-a-lifetime experience can be a joyful experience that's good for us. Spending money that was needed to buy groceries or pay rent has a detrimental effect on the individual's life instead."

Queen Elizabeth II's Platinum Jubilee: Inside the home of a superfan