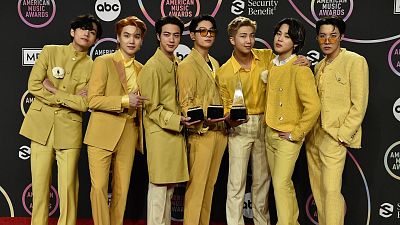 K-Pop superstars BTS were crowned artist of the year at the American Music Awards on Sunday, brushing aside challenges from Taylor Swift, Drake and The Weeknd as they took home a total of three awards.

The group also performed two songs, teaming up with Coldplay for a raucous 'My Universe' and closing the show with 'Butter', which topped the charts earlier this year in the nine countries.

"Seven boys from Korea, united by love for music, met the love and support from all the armies all over the world," said RM – the group's only English-speaking member and unofficial translator – after the group won their artist of the year for the first time.

"This whole thing is a miracle. Seriously, we would never take this for granted."

Their appearance at the AMAs marks their first in-person award show performance in 2 years – appearances at the MTV Europe Music Awards and the Grammys had previously been coordinated via livestream.

Group undeterred by last-minute drop out

An earlier scheduled performance of 'Butter' by BTS and Megan Thee Stallion was scrapped after the rapper cited personal reasons for dropping out the day before. The zeitgeist-y rapper joined the boys on a remix of the track shortly after its initial release in May this year.

Stallion turned out to be a big winner: her debut album 'Good News' won favourite hip-hop album, her single 'Body' was crowned favourite trending song, a new award this year, and she took home the crown for favourite female hip-hop artist.

Nominees were based on streaming, album and digital sales, radio airplay and social activity, and reflect the time period of Sept. 25, 2020, through Sept. 23, 2021.