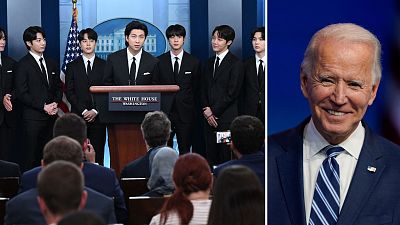 South Korean K-pop sensation BTS didn't sing a word, but in a White House visit on Tuesday, May 31 to meet with US President Joe Biden, the supergroup's message against anti-Asian racism came loud and clear.

"We were devastated by the recent surge of hate crimes including hate crimes against Asian-Americans. To put a stop to this and support this cause, we would like to take this opportunity to use our voices once again," said singer Park Ji-min, ahead of a meeting with Biden.

Another BTS member, Suga, appealed for tolerance, saying, "It's not wrong to be different. I think equality begins when we open up and embrace all of our differences."

Outside the White House, hundreds of eager BTS fans gathered at the gates in the hopes of catching a glimpse of the Korean superstars.

Why were BTS invited to meet with President Biden?

Biden issued the invitation to "discuss the need to come together in solidarity, Asian inclusion and representation, and addressing anti-Asian hate crimes and discrimination, which have become more prominent issues in recent years," the White House said.

Anti-Asian sentiment and violence in the US have grown considerably in recent years, in a phenomenon many blame on fallout from the COVID-19 pandemic.

Biden's Republican predecessor Donald Trump often called the pandemic, which began with an outbreak in Wuhan, China, as "the China virus".

According to the Center for the Study of Hate and Extremism, just in 2021, hate crimes against Asians shot up 339 per cent.

The White House praised BTS as "youth ambassadors who spread a message of hope and positivity across the world."

The band members are credited with generating billions for the South Korean economy, their label enjoyed a surge in profits despite holding fewer concerts during the pandemic.