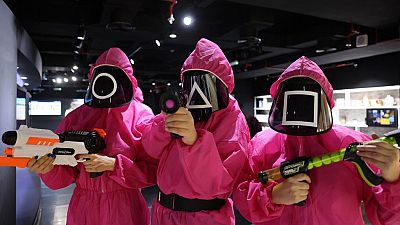 Despite being deemed unsuitable for viewers under 18, the Korean drama Squid Game has led to some schoolchildren trying to recreate the show's violent survival games.

Since its release on Netflix last month, Squid Game has become the streaming service’s biggest series launch ever, reaching 111 million viewers around the world.

The premise revolves around a series of deadly children’s playground games, which debt-ridden contestants compete in for the chance to win a life-changing amount of money.

Netflix has faced criticism, however, as fans - including young children - attempt to reenact some of the games from the show, causing concern for schools and parents.

In a Facebook post that has been shared more than 30,000 times, the municipal school of Erquelinnes Béguinage Hainaut, in Belgium, warned parents about children playing versions of ‘1,2,3 Piano’ and “beating up” the loser.

"We have to protect the children as much as possible, but above all, I wanted to explain to them what happened, to work with them," Sabrina Caci, Headmistress of the municipal school, said.

"I have no impact on what's going on at home, but I wanted to explain to [the parents] that we are very vigilant about surveillance and that we do not take [the recreation of the games] lightly."