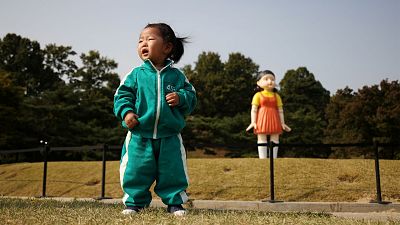 'Younghee' has invited fans of the Netflix smash to play their own 'Red Light, Green Light'   -   Copyright  Reuters
By Shannon McDonagh  with Reuters  •  Updated: 27/10/2021

Fans of the Netflix hit 'Squid Game' are heading to a South Korean park in their droves to check out the life-sized doll featured in the series.

The 13-foot figure, named Younghee, arrived in at Seoul's Olympic Park earlier this week to celebrate the show's global success.

Fans are now being given the chance to play their own version of the first round - minus the mass murder, of course.

In Bulgaria, they call it 'Winnie the Pooh', in Finland, 'Mirror'.

Visitors to the park on Tuesday played the Korean traditional game 'mugunghwa ggoti pieotseubnida’ to music. The premise is simple - stay still when the doll's eyes are on you, and make it to the finish line on time.

Squid Game's English translation of this - 'Red Light, Green Light' - follows the same principles as 'statue' games played by children around the world.

“I really wanted to know how it feels to be in the game. It's like we are on the game, hearing the music and seeing this doll,” said Seoul resident from the Philippines, Sung Hye-jin, standing in front of the doll.

From toddlers to adults to even dogs, some park visitors were seen wearing green tracksuits with number tag ‘456’, similar to the outfits of show's main character, Gi-Hun.

Hundreds of thousands of people around the world are expected to emulate the game in their own Halloween costumes on October 31.

The doll will be displayed at the park until November 21.