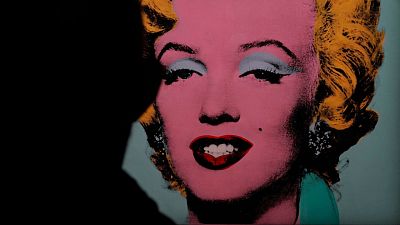 Andy Warhol's iconic sage-blue background portrait of Marilyn Monroe is tipped to sell for a record-breaking $200 million (€180m) at auction in the spring, Christie's have announced.

The auctioneers said it expects Warhol's 1964 'Shot Sage Blue Marilyn' to become the most expensive 20th century artwork when it goes under the hammer in New York in May.

Why is this painting worth $200 million?

The silk-screen work is part of a group of Warhol portraits of Monroe that became known as the 'Shot' series after a visitor to his Manhattan studio, known as 'The Factory,' apparently fired a gun at them.

According to pop-art folklore, a female performance artist by the name of Dorothy Podber asked Warhol if she could shoot a stack of the portraits.

Warhol said yes, thinking that she meant to photograph the works.

Instead, she took out a gun and fired a bullet through the forehead of Monroe's image.

In a statement, Christie's described the 40-inch (100 centimetre) by 40-inch portrait as "one of the rarest and most transcendent images in existence."

Alex Rotter, head of 20th and 21st century art at Christie's, called the portrait "the most significant 20th century painting to come to auction in a generation."

"Andy Warhol's Marilyn is the absolute pinnacle of American Pop and the promise of the American Dream encapsulating optimism, fragility, celebrity and iconography all at once," he said in a statement.

When was the painting made?

The pop artist produced five portraits of Monroe, all equal in size with different coloured backgrounds, in 1964.

It was based on a promotional photograph of her for the 1953 movie 'Niagara' directed by Henry Hathaway.

What is currently the most expensive 20th century painting ever sold?

Only 14 paintings have sold for more than $100 million at auction, according to an AFP tally, although others are expected to have changed hands for as much during private sales.

The most expensive 20th century artwork sold at auction is Picasso's 'Women of Algiers', which fetched $179.4 million in 2015.

Christie's is selling the work, which will headline its spring sales week, on behalf of the Zurich-based Thomas and Doris Ammann Foundation.

All proceeds of the sale will benefit the foundation, which works to improve the lives of children around the world.

The painting goes under the hammer in New York in May at Christie's auction house.

Is it finally the big moment for Spanish cinema?

President Zelenskyy: The actor now playing the role of a lifetime