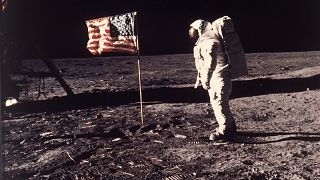 The dark side of the Moon, the first "Earthrise" or the footprints of Buzz Aldrin: more than 70 original NASA photographs, the first of which were taken on the Moon in July 1969, are the subject of a rare auction on Wednesday in Copenhagen.

At the time of writing, the first Earthrise picture taken from Apollo 8 sold for just over €9,000.

"One of my favorite photos from this fantastic collection is a photo of Buzz Aldrin taken by Neil Armstrong where you can see Armstrong reflected in the visor," Kasper Nielsen, an auction house official, told AFP.

The 74 photos are from several Apollo missions carried out by NASA, the American space agency, around and mainly on the Moon in the 1960s and 1970s, including 26 taken from the Earth satellite.

“Of course, the highlight is the Apollo 11 mission reaching the Moon for the first time,” on July 20, 1969, said Nielsen, who led the assessment of the pictures by Denmark's largest auction house.