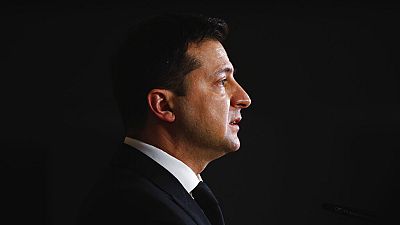 Who is Volodymyr Zelenskyy?

He's the slapstick comedian with the physicality of a young Dudley Moore. He's the much-loved actor in a hit show about a teacher who becomes president. He's the Ukrainian voice of Paddington Bear in the recent movie series.

And now he's playing the role of a lifetime as president of his country, leading the nation with a certain dogged resolve in the face of the Russian invasion.

The 44-year-old never set out to be a politician. Born into a Russian-speaking Jewish family from south-east Ukraine he studied law at university. But young Volodymyr Zelenskyy never became a lawyer, and that's because his first love was always comedy.

He'd been involved in the local comedy scene since he was a teenager and saw a career in entertainment for his future.

The troupe he created, Kvartal 95, toured around the region cutting their comedy chops around the former Soviet Union and at home in Ukraine. Later, Kvartal 95 began producing television shows and that lead to Zelenskyy being cast in a number of films including a string of rom-coms that enjoyed box office success in Ukraine and Russia.

But it was a role on the small screen, not the silver screen, that really cemented Zelenskyy's status as a Ukrainian 'national treasure'.

In 2015 he starred in 'Sluga narodu' - Servant of the People - in the role of a history teacher who becomes president of Ukraine after a video of his character ranting about corruption goes viral.

That plot of the TV show foreshadowed what was to come, as life imitated art.

In spring 2018 his production company set up a political party with the same name as the party from Servant of the People and although he was noncommittal for many months about whether or not he would run for president, Volodymyr Zelenskyy finally announced his candidacy on New Year's Eve 2018.

What followed was a masterclass in campaigning.

Zelenskyy wasn't bound by the rules of traditional campaigning, he engaged with voters on social media platforms and eschewed big mainstream outlets. Some of the same people skills he learned on the comedy circuit likely came in useful on the campaign trail.

And it paid off: because in 2019's presidential election Zelenskyy beat incumbent Petro Poroshenko.

The greatest challenge of his career, and his life, was still to come as he transformed from a comedy stalwart to become the face, voice and conscience of Ukraine. A man leading his people in the fight for the survival of their nation.

Click on the media player above to see the man himself, being himself.