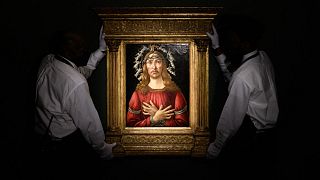 A rare painting by Italian master Sandro Botticelli has sold for over €40 million at an auction by Sotheby's in New York.

The sale of 'The Man of Sorrows' – depicting a darkly coloured portrait of Jesus Christ – wildly exceeded expert predictions and cements the artwork as the third most expensive Renaissance deal of all time.

Three buyers fought it out in a seven-minute duel for a “defining masterpiece from the artist’s late career".

Bidding opened on the morning of January 27 in the US to allow for European and Asian collectors to get a look in.

The portrait is believed to have last been purchased for just under €12,000 in 1963 and has remained in the owner's private collection – until now.

Its winning bid amassed a sum of €5 million more than experts first predicted when news of the auction emerged late in 2021.

Sale marks the third most expensive of the Renaissance era

'The Man of Sorrows' can now be counted as the world's second-most-expensive Botticelli.

A record was set last year to the tune of €82 million for 'Young Man Holding a Medallion', created in late-15th century Florence.

According to Sotheby's, this new sale marks is the third most expensive painting by a Renaissance painter sold at auction, behind Leonardo da Vinci's 'Salvator Mundi' who exploded all eye-watering estimates in November 2017 when it sold for €404 million at Christie's, New York.

Experts in charge of assessing the painting say 'The Man of Sorrows' dates back to the early 1500s, at the end of the life of Sandro Botticelli, who died in 1510.

He is best known for his works exhibited at the Uffizi in Florence, namely 'Spring' and 'Birth of Venus', and as the creator of the frescoes adorning the Sistine Chapel in the Vatican.

After a world tour, the work had been physically exhibited in New York.

But Sotheby's, which is also seeking to take up residence in the metaverse, also created a virtual chapel on its space on the Decentraland platform to show off the painting.

Check out the video above to explore one of the world's most expensive Renaissance works.