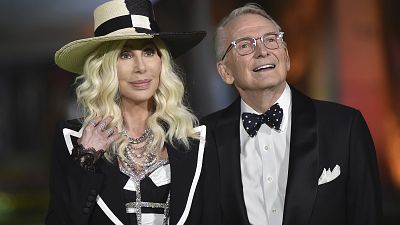 A new book which tells the story of designer to the stars, Bob Mackie, is released today (Tuesday 16 Nov).

Mackie, who created looks for household names like Diana Ross and his close-friend Cher, will use the coffee table book to showcase original sketches and photographs that tell the story of his dazzling career.

You're part of the team that helps create the story, really, and who that woman is or who that man is and where they come from. And are they chic or are they a mess? Who are they?

The 82-year-old will retrace his roots from dreams of costume designing on Broadway at the age of 11 to Oscar nominations and Emmy wins for his stunning and often outrageous creations.

Mackie got his start at Paramount Pictures in 1961 before moving into television and working for the Carol Burnett Show. From this point, his camp and iconic style became synonymous with the muses he worked with.

Speaking about the release of his book, Mackie said, “I love designing costumes. It's the most fun because you're helping.

“You're part of the team that helps create the story, really, and who that woman is or who that man is and where they come from. And are they chic or are they a mess? Who are they? That's the fun part.”

Which big names has Bob Mackie designed for?

In his 60-year career, Mackie has made costumes for stars including Elton John, Pink, Bette Midler and Liza Minelli.

Few may know however that one of his earliest designs was made for none other than Marilyn Monroe when she famously sang Happy Birthday to JFK at Madison Square Garden.

“So she calls (designer) Jean Louis up and said, "Would you make me one of those see-through dresses like you do for Marlene Dietrich?" says Mackie.

“So he (Jean Louis) asked me to do the sketch and he showed me what he wanted.

“Then I never heard about it for the longest time. And then a couple of weeks later, all of a sudden, there's all these pictures in the paper of her singing to the president in this dress.”

Mackie is most famous for designing looks for Cher including her Mohawk headdress, worn to the 1986 Oscars, and the nude illusion dress the singer wore to the 1974 Met Gala.

“Cher shows up in a dress… and it was quite amazing. And people just kind of wore cocktail clothes and maybe a pants jumpsuit or something,” says Mackie.

“They were dressed up, but nothing like it is now. And of course, Cher wearing that outfit made them all think, "Oh, maybe we ought to dress up a little more."

Whether or not Mackie kickstarted the Met Gala red carpet bonanza we see today, his book is set to showcase a lot of fashion history.

The book is authored by Frank Vlastnik and Laura Ross and is out on Tuesday 16th November.