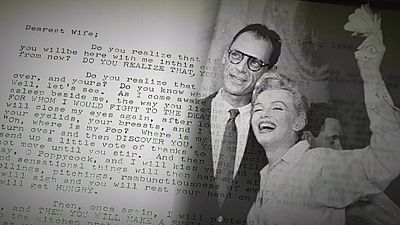 <p>Intimate love letters to and from Marilyn Monroe are going under the hammer in Beverly Hills. </p> <p>In all, more than 200 items are up for sale, including previously unseen mementos and documents having belonged to the <a href="http://en.wikipedia.org/wiki/Marilyn_Monroe" rel="external">iconic Hollywood actress</a>.</p> <p>Since her death from an overdose of sleeping pills in 1962, anything Monroe-related has been hugely collectable, with these items expected to fetch US$ 1 million or more. </p> <p>The lot includes an undated, handwritten letter by Marilyn herself to her third husband, Arthur Miller. Expected to fetch between US$ 4,000 and US$ 6,000, it is the collection’s most expensive projection . </p> <p>The auction also features a letter by her second husband, baseball player Joe DiMaggio, who <a href="http://abcnews.go.com/Sports/story?id=100802" rel="external">never got over their divorce</a> and had flowers placed at her crypt several times a week for decades after her death years.</p> <p>“Joe DiMaggio is in San Francisco and he’s in a friend’s house and he’s watching TV, and Marilyn comes on TV and she’s standing on the steps of her home, and she’s announcing that she’s getting divorced from Joe DiMaggio. And he is truly upset by the news and secondly, he’s very upset to see Marilyn crying. He deeply cared about her. He wasn’t an accomplished writer but he wrote a wonderful, heartfelt letter,” says Martin Nolan, Executive Director at Julien’s Auctions in Beverly Hills. </p> <p>Also on sale is a letter by another Hollywood legend, Jane Russell, Monroe’s close friend and co-star in the classic movie ‘Gentlemen Prefer Blondes’. In it, she calls Monroe <a href="http://www.dailyrecord.co.uk/entertainment/celebrity/love-letters-revealing-how-marilyn-4678967" rel="external">'Dear Little One' and tells her she loves her deeply</a>. </p> <p>“I think what you read first of all is that Marilyn was truly loved. Firstly, if you look at the letters from Arthur Miller – I mean Arthur Miller was an accomplished writer, but his love letters were so descriptive and so detailed. He was truly, truly in love with Marilyn,” says Julien’s Auctions Martin Nolan. </p> <p>Other letters from friends like Clark Gable and Cary Grant are also up for sale, though there is no sign, in the collection, of the alleged love affair between Monroe and US president John Kennedy. </p> <p>The items go under the hammer on 5th and 6th of December at Julien’s Auctions in Beverly Hills, Los Angeles.</p>