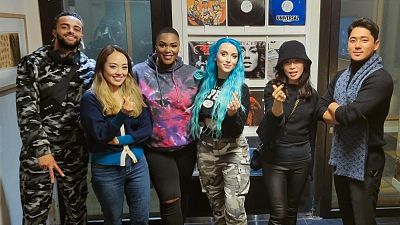 A new musical is being developed that could bring the high octane energy of a K-pop concert to the stage of a West End theatre in London.

Korean pop acts like BTS, BLACKPINK, Girls' Generation and Big Bang generate a combined annual revenue of more than $5 billion, and producers of the new musical are hoping to capture a slice of that market - and grab the attention of K-pop's committed fan base as well.

"It revolves around a boyband of five, and we've brought on a book writer Kyo Choi who formed a beautiful story around a concert setting, so audiences will come to the show and be immersed in a concert."

Unlike most genre musicals, Icon will feature original tracks, not cover versions of other artists' songs. The new music will be penned by K-pop hitmakers THE HUB, so they'll come with a ready-made K-pop pedigree.

In a case of art imitating life, the fictional Icon boy band will be performing a farewell concert as one of their members has to go off to do his compulsory national service in the South Korean military. That's the same situation being faced by the world's biggest K-pop group BTS, when the oldest member Jin has to start his military service later this year.

Chris Poon describes this storyline as a "tension point" in the narrative of the musical.

"It's one of those things where it's happened to bands in the past, and it's created a lot of uncertainty for the band's success. Either they come back and they've aged up, or there's a brand new thing come along, or it isn't quite right any more" he tells Euronews.

The musical is currently in the development phase, with a workshop starting soon. Producers would hope to get it in front of audiences at some point during 2023 but haven't yet secured a specific London theatre for performances.

K-pop concerts are known for their spectacular shows, with pyrotechnics, lasers, and incredible choreography on stage. So will audiences be able to see something similar at Icon within the confines of a traditional West End theatre space?

Musical director Chris Poon says the aim is to give audiences an immersive experience, filled with all the elements that make K-pop so appealing.

"Every member in each K-pop band has a well-defined role whether it's visuals, or a rapper or a lead vocalist. So the team are working very hard to make this as authentic and respectful to K-pop, as well as paying homage and respect to musical theatre form."

Bringing diversity to the stage

Of course, with a musical about a boy band from Korea, the product team is looking to cast Korean or East Asian singers, dancers and actors.

Poon says this brings some much-needed diversity to the world of musical theatre, especially around representations of Asian people on the stage.

"I've been working in the theatre industry for almost four years now, and I've lived here [in the UK] most of my life, but I've never been in a room where the majority of people in the room look like me. And that to me is so important," explains Poon, whose family comes from Hong Kong.

The theatre industry has often been criticised for controversial Asian casting decisions - famously in 1989 when Miss Saigon opened in the West End with Caucasian actor Jonathan Pryce as The Engineer, a Vietnamese-French character. Pryce, and another Caucasian actor cast in an Asian role, originally wore prosthetics and makeup to make them look 'more Asian.'

When the show transferred to Broadway two years later, Pryce played the part again, despite a very vocal backlash; but when the show was revived from 2014-2018 a Filipino-American actor was cast in the role of The Engineer.

"I think having a show like this out in the world hopefully can encourage and inspire and empower East Asian people to put East Asians into the spotlight in an inspiring role," Chris Poon explains.

"Certainly when I was growing up, that was never something I saw in Western media. It was East Asian people playing the sidekick, the caricature comedic foil, so for me personally, it means a lot to see something like this happen."