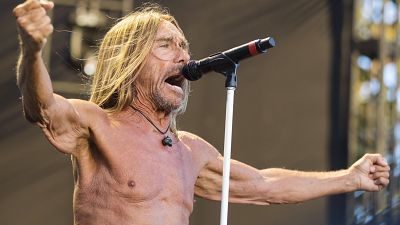 Iggy Pop, Placebo, and Biffy Clyro are among those pulling out of Russian festival Park Live   -   Copyright  Colin Young-Wolff/AP
By Paul Stafford  •  Updated: 11/03/2022

One after another, internationally renowned musicians are cancelling all upcoming concerts and festival appearances on Russian soil.

Iggy Pop was among the first to withdraw from the Park Live festival in Moscow last week, which is scheduled to take place over three weekends in June and July 2022.

“In light of current events, this is necessary. Our thoughts are with the Ukrainians and all the brave people who oppose this violence and seek peace,” the enigmatic punk rocker noted in a statement posted on Twitter.

The festival appearance of Iggy Pop in Moscow on the 10th of July 2022 is canceled. In light of current events, this is necessary. Our thoughts are with the Ukrainians and all the brave people who oppose this violence and seek peace. #StandingWithUkraine

Other bands followed suit. Biffy Clyro, The Killers and Placebo all dropped the Park Live festival from their tours, while Green Day, Bjork and Iron Maiden cancelled appearances at various events across Russia in the coming months.

The Revolution Will Be Televised

During the Cold War, Western music was one of the more potent links between the isolated citizens of the Soviet Union and the outside world, seeping through the Iron Curtain in the form of bootlegged, black-market cassette tapes and records.

By 1989, the Glasnost “openness” policy under then General Secretary of the Soviet Union, Mikhail Gorbachev, led to musicians performing live in Moscow to hundreds of thousands of people. But just as these performances reflected an influx of new freedoms for Russian people, so the current cancellations in Russia reflect their erosion.

Most of the bands signed up to Park Live in Moscow this year were also scheduled to play a sister festival in Kyiv called UPARK Festival. Thanks to Russia’s invasion of its neighbour it is now highly unlikely that either event will take place.

“As it stands the Ukrainian one is in an active war zone and the Russian one all countries are advising against travel to, making it impossible to do for international acts,” said Geoff Meall, an agent at Paradigm Talent Agency who represents the bands Sum 41 and My Chemical Romance. Both bands were due to play at Park Live and UPARK this summer.

“Not that there is anything tangible to actually pull from, as the event, of course, won't happen,” he said. Park Live, which was first held in 2013, has not run since 2019, with the 2020 and 2021 iterations both cancelled due to the COVID-19 pandemic.

With Park Live still not officially cancelled, ticket holders, many of whom held onto their tickets initially bought for 2020’s cancelled event, are taking to the festival’s Instagram page to voice their frustrations.

“Longest term investment of my life,” said one user, @juliet.estrina. Many other users complained of not being able to get refunds on their tickets, or criticised the indefinite postponement.

“As you can imagine the organisers of the events there are heartbroken at the turn of events. The Ukrainian team have had to escape Kyiv,” said Meall, about the current situation.

No official comment has been made about the proposed plans for Park Live and there have been no updates about the cancellations since March 3. Meanwhile, comment posting on Park Live’s VK page – a Russian social media platform still largely accessible in Russia – was closed.

Melnitsa International, the organisers of Park Live in Moscow, did not respond to requests for comment, although daily updates on their social media pages only add to the number of cancelled tours and gigs, spelling the end of Western musicians playing live concerts in Russia for the foreseeable future.

Festivals for Peace, not War

The international music community’s growing embargo on playing live in Russia stands in stark contrast to the Moscow Peace Festival, which took place in Luzhniki Stadium (then named the Central Lenin Stadium) on August 12th and 13th of 1989.

Metal bands from Europe and the US, including The Scorpions, Ozzy Osbourne and Mötley Crüe, played two shows at the festival in the Russian capital to promote peace and the abstention of drug use.

Ironically, many of the musicians who have spoken about the festival in the years since, such as Scorpions frontman Klaus Meine, are quick to mention that many of the party travelling to Moscow were drinking and using drugs the moment the plane took off.

A little over two years later, the Soviet Union was dissolved and much of Eastern Europe was gradually reintegrated into the international community. And in Russia, music remains a vehicle for political opinion. Punk rockers Pussy Riot are among Russian President Vladimir Putin’s most vocal and visible opponents.

Nadezhda Tolokonnikova was among three of the band members convicted of “hooliganism motivated by religious hatred” and sentenced to prison time following a performance at Moscow's Cathedral of Christ the Saviour in 2012.

On cancelling their appearance at Park Live, Placebo’s official statement read: “We stand firmly against the atrocious war currently waged against Ukraine”.

At the time of writing, Park Live is still scheduled to take place with a number of top-end rock acts remaining on the bill.

Under Pressure: The top 5 landmark cases in music copyright disputes