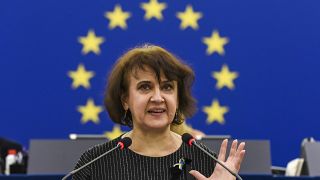 The Ukrainian author chastised European leaders and others for their dithering on the Ukrainian invasion   -   Copyright  Pascal Bastien/AP
By Tim Gallagher  with AFP  •  Updated: 09/03/2022

Ukrainian writer Oksana Zaboujko called on Europeans on Tuesday to stop dithering over their response to Vladimir Putin's invasion of Ukraine by Russia, telling them that each of their coffee breaks "cost a life".

The ‘Museum of Abandoned Secrets’ author was speaking at the European Parliament, Strasbourg in an effort to bolster support for Ukraine against Russia’s onslaught.

"Every moment of hesitation by Western and NATO decision-makers...every coffee break you take while discussing how to intervene...costs a life, more likely of a civilian," the writer and philosopher said.

Her speech was greeted by a standing ovation from MEPs.

Despite a severe raft of sanctions and widespread condemnation in other sectors there is some indecision over further support for Ukraine from the EU and NATO.

On 8 March Poland suggested it would donate Russian-made battle jets to the US to be later gifted to the embattled nation but this offer was rejected by the Americans.

The suggestion of a no-fly one has also been softly ruled out, with leaders either rejecting the idea outright or at most appearing non-committal.

When the Ukrainian flag was hoisted in front of the European Parliament Oksana Zaboujko, who was invited to speak for International Women’s Day, compared the Russian president to a "new Hitler".

The ‘Fieldwork in Ukrainian Sex’ writer expressed regret that more sanctions had not been implemented after the annexation of Crimea in 2014.

"It will not stop until it is stopped by an international front of all nations who still believe that freedom and human solidarity are worth more than gas and oil," Zaboujko said to applause from MEPs.

Some of them then joined a few dozen demonstrators in front of the European Parliament building, gathered behind a "We stand with Ukraine" banner and shouting "Putin assassin" and "Ukraine is Europe".