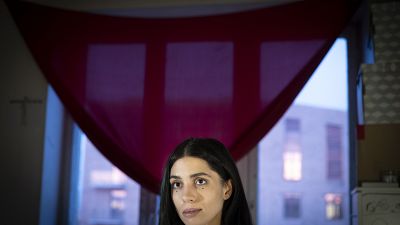 The Russian government has designated several cultural figures as "foreign agents" in its latest crackdown on freedom of expression.

On Thursday Russian authorities named a member of the Pussy Riot punk group, a satirist and an art collector on it’s "foreign agents" list, which critics say is aimed at discrediting government opponents.

The Justice Ministry applied the label to Nadezhda Tolokonnikova, a Pussy Riot member who became widely known for taking part in a 2012 protest inside Moscow's Christ the Saviour Cathedral after which she spent nearly two years in prison.

Tolokonnikova tweeted that she wouldn't abide by the requirement to mark her posts with the "foreign agent" designation. She said she would challenge the authorities' decision in court, concluding: "Russia will be free."

"The government can label their asses if they'd like.”

Shenderovich told Echo of Moscow, a Russian radio station, that he believed the government want to push him out of the country.

What does “foreign agent” status in Russia mean?

The designation of “foreign agent” has been active since 2012 with the Kremlin claiming it is necessary to combat foreign interference.

To date, 111 individuals and groups have been named on the “foreign agents” list.

Legally, those named as "foreign agents" are obliged to disclose sources of funding, undergo audits and are required to add a lengthy statement to news reports, social media posts and other materials specifying that the content was created by a "foreign agent."

Russian authorities have applied the designation to scores of media outlets, civil society groups and individuals, ratcheting up pressure on those who speak out against the Kremlin.

Earlier this week, Russia's court on Tuesday shut the country's oldest and most prominent human rights group, Memorial, citing its failure to identify itself as a "foreign agent."

The rulings were denounced by the United Nations, the United States and the European Union.

This year crackdowns on dissenters in Russia have increased exponentially with the imprisonment and suspected poisoning of Putin’s political opponent, Alexei Navalny.