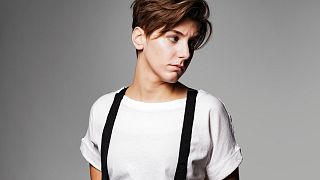 Some of Britain's best-known comedians are putting on a fundraising event for Ukraine this week, inspired by a man they consider 'one of their own' - Ukrainian comic-turned-president Volodymyr Zelenskyy.

Award-winning funny woman Sarah Keyworth is the driving force behind the show, which sold out in just a few hours, and will also stream live on Tuesday evening to raise money for the Ukrainian Red Cross Society. Other household names on the bill include Joe Lycett, James Acaster, Nina Conti and Nish Kumar, who'll all be appearing at the legendary London venue The Comedy Store.

"It was actually my mum's idea. I was at home last weekend and we were talking about how President Zelenskyy was a comedian, and she said well maybe you could do a comedy event, and that's how it started happening," Keyworth tells Euronews.

"Everyone I talked to in the last couple of weeks the general refrain is that you feel so helpless watching and reading about all of this that you wish you could contribute in some way, and this feels like something."

Keyworth, who can be seen currently in her own comedy special 'Dark Horse' on Amazon Prime, teamed up with Russian-born comedian Olga Koch to muster their friends and find a venue. None of their fellow comedians needed to be asked twice to take part, and the pair had more offers of help than they could fit on the bill.

Other countries have had actors or reality TV hosts who went on to become presidents, but it's an unorthodox route from being a rom-com film star to the nation's highest office.

Long before he got into politics, Volodymyr Zelenskyy toured as part of a successful comedy troupe. His success in a string of romantic comedies lead to the wildly popular Ukrainian TV show 'Servant of the People', where Zelenskyy played the lead role of a teacher who becomes president on an anti-corruption ticket.

In a case of life imitating art, Zelenskyy's production company then set up a real political party with the same name as the political party in his hit TV show and he went on to win the 2019 presidential election in Ukraine by a landslide, running on an anti-corruption ticket.

"It's a fascinating concept isn't it?" notes Sarah Keyworth. "He's essentially a personality who's become the figurehead of the resistance, which is incredible."

'Servant of the People' has now been snapped up by broadcasters around the world, and Keyworth says she thinks comedy has a special role to play at the moment, particularly when there's so much terrible news about the war on television, in newspapers and online.

"A lot of people's coping methods is joking and using humour to make it feel like there's light and life outside of the darkness," she says.

"People love to laugh, and people love comedy. And I think comedians can be very funny, and very silly, but also very astute and shine light on what's going on in the world" she says.

Apart from their links through the world of comedy, Sarah Keyworth has another more personal connection with Volodymyr Zelenskyy: they're both Jewish.

Vladimir Putin has tried to justify his invasion by claiming the country is run by Nazis, and saying he wants to denazify Ukraine.

"It's hard to hear the nonsense that Putin is spouting and not feeling incredibly frightened and for it not to be a horrible reminder of what happened not very long ago to Jewish people," says Keyworth.

"He's a liar, and he will say whatever he wants to say."

"I think it really does resonate with me because it's really awful. It's almost the laziness of the lie that's really insulting and the use of a phrase that takes us all back to World War Two whilst invading a country in the same way is cruel and it's terrifying."

The 'Stand Up For Ukraine' comedy show takes place on Tuesday 8th March at 20:30 CET, and the live stream costs five pounds to access. Profits are being donated to the Ukrainian Red Cross Society.