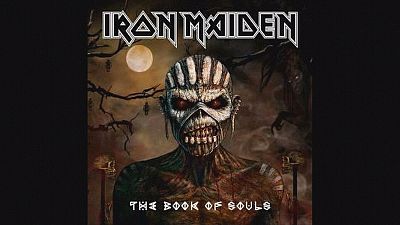 Warning – Iron Maiden are back. A new album and plans for a world tour in 2016. “The Book of Souls” is their new album. It is their 16th and to date their longest running at 92 minutes. It is also their first studio double album.

Nobody gets to hear the music until we are finished it. So, the manager doesn't get to come down to the studio; he's banned.

The band recorded it between September and December last year with many tracks written and then spontaneously recorded to give the music a live feel.

“Nobody gets to hear the music until we are finished it. So, the manager doesn’t get to come down to the studio; he’s banned. The record company don’t get to come to the studio. Nobody gets to hear it until we finished it and then if they don’t like it then, you know, “Houston we have a problem”. But even if they don’t like it we’re still not going to change it,” explained lead singer Bruce Dickinson.

Iron Maiden was formed in 1975 in east London by bassist and songwriter Steve Harris. Bruce Dickinson joined the line-up in 1981.

He has also worked as an airline pilot and regularly flew Boeing 757s and was captain on the flight deck.

Earlier this year he underwent seven weeks of chemotherapy and radiation for a cancerous tumour which was discovered at the back of his tongue. But he has now been given the all clear and will join the band on tour and will also return to the controls of a special Boeing.

“I phoned up my manager, I said you know that it seems like I’m getting better?’ He said, ‘yeah.’ I said ‘do you fancy going around the world now in the airplane?’ He goes, ‘oh my God,’ he said, ‘we come out with the amazing album and your’re better and your’re flying the “Queen of the Skies”, oh my God.’ I said ‘Ok calm down, calm down,’” he recalled.

The Queen of the Skies is the Boeing 747-400 jumbo jet which will fly Iron Maiden around the world next year with their lead singer piloting the band on their journey of more than 55,000 miles.

Joining the band on board will be more than 12 tons of equipment. They will stop off at six of the seven continents and The Book of Souls World Tour 2016 is expected to visit 35 countries.

The new album The Book of Souls is out now.