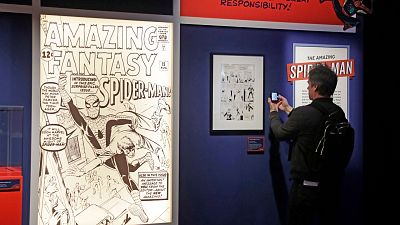 The original art for the Spiderman origin story is displayed during the US exhibit 'Marvel: Universe of Super Heroes'   -   Copyright  AP
By Shannon McDonagh  with AFP  •  Updated: 17/01/2022

An original page of a comic book featuring Spider-Man in 1984 in Marvel's rare Secret Wars series reached the record price of $3.36 million (€2.9 million) at auction in the United States.

The sale makes Spiderman the most powerful superhero where sales are concerned.

In the three-panel page by Mike Zeck from issue 8 of 'Secret Wars', a series published by Marvel Comics in 1984-85, the superhero puts on the black costume for the first time, which turns out to be a symbiote (parasite extra-terrestrial), giving birth to Venom, the franchise's fearsome "super-villain".

It's a moment film, literature and television have been trying to recreate ever since.

A big reveal for even bigger money

"This page was the big reveal alluded to on the cover! This is where Peter Parker (the heroic teenager hiding under the Spider-Man mask) really got his fancy new black costume," explains the auction house Heritage Auctions, describing page 25 of the publication.

"It's a costume with a secret! Because it quickly turns out to be alive and has its own agenda. It's the origin of the character of Venom!"

The work was initially offered at $330,000 (€289,000). But prices for comics – even single comic book pages of this kind – are wildly on the rise as fans find themselves steeped in nostalgia over their favourite heroes.

Just minutes after the sale the auction house were said to be offering up a comic depicting the first appearance of Superman, which sold for €200,000 less, says Heritage Auctions.

None of the sellers or buyers of each were identified.

The show must go on for Ukrainian circus trapped in Italy

Is needle-spiking spreading across the European club scene?