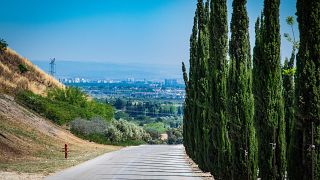 Tu Bishvat was used in the late 19th century to plant trees across modern-day Israel, draining the swampland to make it inhabitable.   -   Copyright  Tim Borodin
By Marthe de Ferrer  •  Updated: 11/02/2022

It’s likely you know of Chanukah (or Hanukkah). You’ve probably heard of Yom Kippur and Passover (aka Pesach). At a push, you may have come across Rosh Hashanah and Purim too.

But this is usually where people’s knowledge of Jewish holidays stops - especially if most of your understanding comes from popular culture. From Seinfeld to Broad City to Marvelous Mrs Maisel to Crazy Ex-Girlfriend to Friends, we hear of Passover seders and Yom Kippur fasts - but Tu Bishvat never gets a look in.

Tu Bishvat (also spelt Tu B’Shevat) is likely unknown to most outside of Judaism - so let me introduce you to one of the lesser-known Jewish holidays.

What is Tu Bishvat?

This minor, one-day festival is also known as the ‘New Year for Trees’. It’s effectively a festival dedicated to nature, centred around giving thanks to the natural world.

For centuries, Tu Bishvat wasn’t really a holiday at all. It was purely a legalistic date, used to determine when people could calculate the tithes from fruit picking.

It didn’t start to become a celebration until the Middle Ages, and wasn’t officially a holiday until the 16th century when the Kabbalist Isaac Luria and his followers in the Galilean city of Safed successfully established the festival.

When does Tu Bishvat take place?

Each year, the festival takes place on the 15th day of Shevat. Shevat is the 11th month of the Hebrew calendar (and also the 5th month, but there isn’t enough space here to explain how the Jewish calendar works).

It usually falls in late January or early February but is a bit earlier than usual this year.

How do you celebrate Tu Bishvat?

Since the 19th century, Tu Bishvat has been used to plant trees in particular. This tradition began with early Zionists, as areas in the Southern Levant bordering the Mediterranean were effectively just swampland. Tree planting was used to help drain the water and create liveable space.

Later on, planting eucalyptus trees became a particular focus, in an effort to combat malaria outbreaks in the region.

In modern-day Israel, it’s also designated as the country’s official Arbor Day, with organisations and communities continuing to engage in tree-planting projects.

Many people also choose to have a Tu Bishvat seder - a special celebratory meal of fruit and nuts.

Much like a Passover seder, there are specific items (each with their own Kabbalistic meaning) that have to be included on the plate and eaten in a set order, while different blessings are read.

For Tu Bishvat, the order is:

The changing colour of the wine (or grape juice, for those of you still doing Dry January) represents the changing of the seasons. The various types of fruits and nuts, each have their own symbolism and spiritual meanings, often linking back to the theme of nature.