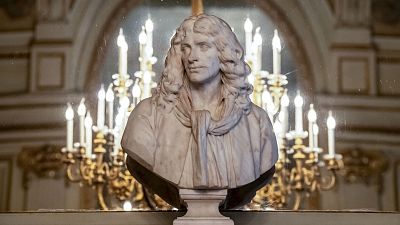 Saturday marks the 400th anniversary of the birth of Jean-Baptise Poquelin, better known by his stage name, Molière.

Dubbed the Shakespeare of France, the actor and playwright is considered one of the greatest wordsmiths of the French language.

400 years since his birth in January 1622, his plays are still performed in theatres around the world - his influence is such that the French language is often referred to as the ‘language of Molière’.

The early life of Molière

The exact date of Molière’s birth is unknown. However, a certificate of his baptism was found dated January 15th, 1622.

Molière’s was born into a prosperous household. His mother, the daughter of a bourgeois family; his father, a chief upholsterer and valet to King Louis XIII.

Expected to eventually take on the royal appointment of his father, Molière instead had his heart set on the theatre.

At 21 years old, he joined forces with actress Madeleine Béjart and founded the Illustre Théâtre, which soon fell into debt and Molière ended up completing a 24-hour stint in prison.

After his imprisonment, the French playwright fled Paris at 23 years old and joined a troupe of actors.

The theatre company toured the kingdom to great success for 12 years, and in this time Molière began crafting his plays and acting in them.

In 1658, Molière and his troupe returned to Paris and performed for King Louis XIV, in the guardroom of the Louvre.

The performance earned Molière and his theatre company valuable patrons in the form of the king and his brother, Philippe, Duc d’Orléans - who granted the troupe permission to perform in the large hall of the Petit-Bourbon, and later on, the Palais-Royal's theatre.

With his troupe firmly established in a permanent theatre in Paris, Molière went on to write some of his most influential works, including 'The Affected Young Ladies' (1659), 'The School for Wives' (1662), 'Tartuffe' (1664) and 'The Misanthrope' (1666), which all earned significant acclaim from bourgeois audiences.

Many of Molière's plays became known for their norm-challenging comedy and pastiches of 17th-century French society.

In the words of the playwright himself, 'the duty of comedy is to correct men by amusing them'.

Consequently, Molière's writing received constant criticism throughout his lifetime and several of his plays were banned or forced to be rewritten.

Most notably the controversy surrounding his 1664 play, 'Tartuffe'.

The play tells the story of Orgon, a wealthy gentleman, who allows himself to be duped by a fraud, Tartuffe, who is able to completely destroy his family by pretending to be devoutly religious and holy.

The Catholic church was outraged by Molière's portrayal of a fraudulent religious character, which eventually led to the play being banned entirely by the court.

Yet Molière persisted, and instead wrote a censored version of the play in 1669, which this time was allowed to be performed and was met with acclaim.

The legacy of Molière

Molière died from pulmonary tuberculosis on 17 February 1673, shortly after a performance of his play, 'The Imaginary Invalid'.

Though many corners of Molière's contemporary society criticised his work, their ideas did not diminish his widespread success with the public and his global influence on theatre.

"Molière's theatre was extremely important on an international level. He even founded some national theatres that completely adapted his plays to the local languages and adapted them to the spirit of their country," describes curator and archivist at the Comédie Française theatre, Agathe Sanjuan.

At La Comédie Française in Paris, the oldest active theatre company in the world, the legacy of Molière's work lives on.

Founded in 1680, the theatre is widely known as 'La Maison de Molière' in honour of the playwright, and his plays are performed at the theatre with great regularity.

In honour of his 400 year anniversary, the Comédie-Française company will perform a special performance of the originally banned 1664 'Tartuffe' – or at least a text as close to it as possible.